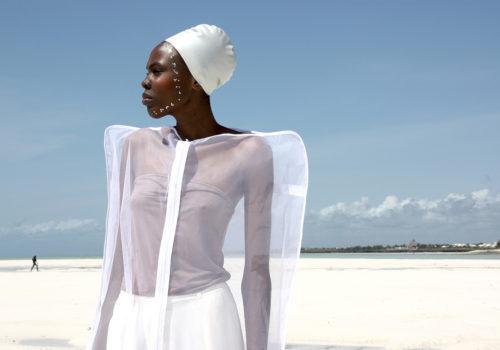 Radio Trastevere Gallery hosts the Santafrika exhibition conceived by Sant’Era with the shots of the visual designer Sabrina Poli. Last Roman appointment of the four pop-up exhibitions “Out of print. Wandering Pop Up Art Exhibition ”curated by Barbara Braghittoni.

The Santafrika project was born to make a dream come true:
where tides create lunar landscapes, light and clouds accompany you like a spectacular roof and without end.

A journey to realise a vision, that is, to unite the opposites of Barbara’s personality: conceptual rigour and the authentic soul of a land called ‘home’.
Contradictory juxtapositions, African braids sparkling with glitter to refract the sun, gold lips and accessories from another era.

The essence of the project lies in the selection of couture dresses by conceptual Nordic designers from the turn of the century, set in a pure and uncompromising atmosphere. A selection of about twenty photographs, printed on aluminium, featuring young Kenyan women dressed in original couture dresses from the well-known Maison Martin Margiela – Artisanal and Comme de Garçons collections.

The hairstyles harmonise and contrast at the same time with their surroundings and the models, with their natural elegance, interpret a fashion ‘out of time’ between West and East Africa.

The passion for colour, the desire to experiment and constant research are the great driving force that accompanies Barbara in her daily work and makes her an unconventional professional.

I was born when July turns into August, in glorious ’65.
In the summer heat, amidst the scent of earth, rosemary and mint. Maybe that’s why they say I’m a pasionaria …
On the other hand, I’m Leo, there’s nothing to add.
The countryside and the sea belonged to me, but as I grew up they were also too narrow for me, I dreamed of bigger spaces and deeper seas.
So with one loose braid and the other unravelling in my hands, at the age of 20 I came to Rome. In the centre of the world.
My first experience was with John Santilli, Artistic Director of Vidal Sasson, my Maestro and mentor. I followed John’s school and learned as one learns certain crafts; toil, hard work, trial and error, sweat and laughter, and while I collected my hair in every possible way, I collected my first friends, I collected my first music, the first paintings and the first clothes, the ones I still collect, discovered in unthinkable places.
Then I got on another train and arrived in Bologna, where I stayed for four years at Toni & Guy’s as a teacher of Cut and Colour, at the Academy. And again Divi & Divine directed by Vincenzo Lusa.
Precious and fertile years.
I began working with leading companies in the sector such as L’Oreal, Meda Vita, Kamon, Alpha Parf. At the same time I crossed frontiers, in many ways, I started freelancing and with it the started shooting, I got as easily on planes as I did my sandals.
A brilliant period began, where the horizon opened up like when you meet the sunrise over the ocean and from the window at twenty thousand metres you realise, really, that the earth is round: Singapore, Hong Kong, São Paulo, London, Paris and again Europe and a lot of beautiful Italy.
Around the mid-nineties, I decided to take a sabbatical year.
I choose Africa, Kenya, and experience the enchanting feeling of returning home. Where I fed on transparent sea and a red moon. My batteries recharged and my heart dreamed of new projects. Dreams that shaped on my return, I started collaborating with photographers who have left their mark.
I entered the pages of Grazia, Marie Claire, Glamour.
In 2007 I was in Ibiza, as shop manager for the David (not J.L.) chain, which opened a sister salon in Barcelona. With this experience I made new contacts and realised important projects, such as the wedding of the model Keiko.
In 2010 my shop, “Sant’era”, was born.
On the historic left bank of the “Leonardo” Canal Harbour in Cesenatico, here I created my space that had belonged to the barber Sante for fifty-two years.
And it was on his barber’s chair that, one afternoon when passing to say hello (he was tipsy, snoring placidly and smiling), we talked and after two months, the place was mine. After so many years around the world.
The name Sant’era came about as a homage to this pop-eclectic character from Romagna, because it belonged to Sante, the barber.
I renovated it and furnished it with vintage objects, I wanted every inch to be part of me.
The mirrors were chosen at antique markets, the armchairs are my aunt’s, a hairdresser from the 1950s, and the decorations in the tiny bathroom are by my friend Delio Piccioni, an artist of marine and terrestrial worlds who, delicate and poetic, heartens the soul deep inside.
My obsession with quality always leads me to search for the best, when it comes to hair products.
I love and respect nature, so I cannot avoid using the best the market has to offer, so, without being obsessive, quality is my flag.
At Sant’era you come by appointment. One customer at a time.
A dedicated time.
To complete the fashion-hair-make-up circuit, I offer exhibition space to creatives, stylists and young artists. Winter is the time for research, I love Antwerp and many Nordic cities besides my beloved Rome and Belgian designers and in particular Martin Margiela (of whom I declare myself a true fan).
Once a year I organise a fashion & art themed event.
In the summer, Sant’era becomes a real meeting place: with aperitifs, charity markets in favour of African women’s associations, round-the-clock until twenty-two for friends and friends of friends.
So, this is my place. This is my customers’ place.
The place that I always thought and wished could be a unique place. A place that could be a space.
A space of encounters, of words and of beauty.
The beauty of women, of fashion, the visual beauty of art and of all those who have a beauty to tell. A space where it is possible to find the relief of being oneself, to be as ‘nowhere’ familiar and at the same time, at the centre of the world.