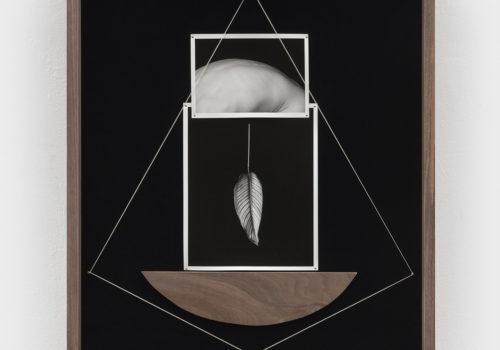 Rachel Uffner Gallery presents Leaning In, the first solo exhibition at the gallery by artist Sheree Hovsepian. Following her inclusion earlier this year in the 59th Venice Biennale, Hovsepian continues her ongoing investigation into the process of photography and its conceptual implications while also exhibiting works in other mediums, such as works on paper and figurative sculptures, for the first time. In their varied forms of expression and the cross-referential relationships they suggest, these recent works demonstrate the kind of material interplay and generative experimentation that occurs in the artist’s studio, which Hovsepian has called a “nest-like” site of creativity.

In new works that build upon the visual language of those on view in Venice, Hovsepian employs assemblage techniques that evoke experiences of stratified consciousness and physical displacement—collaging together photographic images, wood, ceramics, string, and other elements in box-like frames that offer glimpses of the human figure—an arm or a hip— cloaked in layers of ordered abstraction. The precise lines and edges within these assemblages lend the works a cartographic quality, raising questions about the body in space, movement, borders, and boundaries.

Despite the stark differences in their visual styles, the large-scale works on paper Hovsepian is exhibiting for the first time share many of the conceptual concerns of her photography-based assemblages. To create these works, she moved ink used for printing photographs around on the surface of paper, forming a network of lines that branch and intersect, visually recalling the volumetric structure of tree roots and other organic shapes. These works on paper function on one level as conceptual experiments, implicitly questioning the boundaries that distinguish photography from other mediums. Just as Hovsepian’s assemblages complicate notions of photography’s directly representational capacities, these works on paper appear to ask, “Can any image rendered in photographic ink on paper be qualified as a photograph?”

Throughout her career, Hovsepian has challenged the traditional understanding of the photograph as a record of the singular “decisive moment” described by photographer Henri Cartier-Bresson, instead exploring the ways in which photographic processes are additive and cumulative. Viewed in this light, the works on paper appear as documents of an embodied performance, showing the artist’s attempt to balance control and loss of control. Rather than allowing the conventions of the medium’s history to restrict her practice, Hovsepian deftly uses photography as a tool and conceptual starting point, often emphasizing connections between the physical conditions of photographic materials and the body.

For Hovsepian, these relationships across mediums also tie together ceramics and photography, particularly in the way each of them takes an impression of a fleeting moment and translates it materially through a chemical process with uncertain results. Although her assemblages sometimes feature ceramic components, the totemic figurative forms included in Leaning In provide a refreshed perspective on the artist’s subtle explorations of the body, abstraction, and form.

Sheree Hovsepian (b. 1974, Isfahan, Iran) earned her MFA from the School of the Art Institute of Chicago in 2002, a dual BFA/BA from the University of Toledo in 1999, and studied at the Glasgow School of Art, Scotland in 1998.