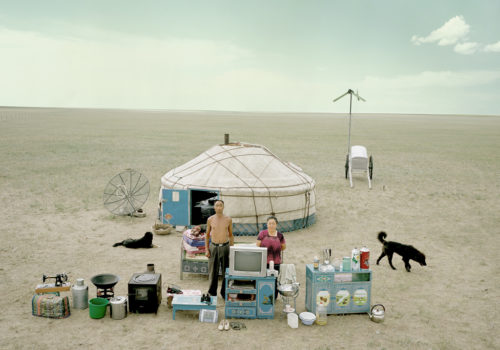 Here is the second part of Qingjun Huang’s work. Yesterday we presented Steam Locomotives. Today, here is Family Stuff and the remainder of the interview with our correspondant CYJO.

How did you begin working as a photographer?

After working as an electrician for 3-4 years in an oil company in the 1990’s, I knew I had to pursue my passion and become a photographer.

At first, I was a bit shy and only shot images in nearby villages and towns, creating mostly photojournalistic or documentary images. I used black and white film because it was what I could afford, as color film was more expensive. I remember sending out a thick envelope, containing a stack of my photos for editors and agencies to review. In the beginning, no one knew my work. And there were countless times where that envelope was returned unopened. However, I continued to send it out for review and eventually had my work published in local magazines and newspapers. I also entered competitions.

How did you develop your style?

There were very few photography magazines and publications with photography when I was starting out. In 2000, I met a friend, Xiaomin Shen, who returned to Beijing from Sydney who was very influential with introducing me to new ways of crafting work. He is an artist that created animal skeletons into sculpture forms.

2003 was a turning point because I moved to Beijing and was exposed to the frontier of Chinese photography. I was able to experience a variety of art forms and different kinds of photography. Before, I used to shoot documentary style, wait for the moment, wait for the light and wait for the right angle to shoot a scene as illustrated in “Steam Locomotives”.

Through other influences in Beijing, I changed my focus from waiting for the moment to creating the moment that can be found in “Family Stuff”.

“Family Stuff” – Can you tell us about this project?

This series started in 2006 after I was inspired by an image of a family portrait published in the National Geographic. It was a different kind of image than what I produced for this series, but it served as a catalyst.

I wanted to shoot the families outside of their homes with the items they lived with, so people could see the fast development and changing lifestyles Chinese families were experiencing both inside and outside of their homes. Family portraits from various Northern provinces were captured, including Heilongjiang Province, Inner Mongolia, Jilin Province and Liaoning Province. Hongjie Ma shot a series of family portraits in the South, which included Hunan Province, Guizhou Province, Gansu Province and Sichuan Province. He had collaborated with me on the project.

There was a process. The families were paid a stipend and also signed a contract to give permission to take and use the photos.

Which families were the most interesting for you to shoot?

Before the Olympics happened in China, Beijing was going through very rapid development. There’s a picture of a Beijing family shot in March 2007 that dramatically shows this. This family’s residential area was going through a lot of demolition. I visited them a few times and asked them to call me if they ever decided to move. When they called, I helped them move their objects outside, waited for the train to come in the background and shot the picture. The image of their small house surrounded by rubble and framed by taller modern buildings is a memorable one. It took between 3 and 4 months to arrange this shot.

In contrast, the Mongolian family portrait took only 2 hours to prepare. You can see how simply they live, enveloped by the few objects they own including their traditional furniture. When you look closely, you can also see that this family that lives in a modest sized yurt has a television, DVD player, a satellite dish and an electricity generator. Simultaneously, the image also shows the dissipating grasslands that once were.

What are your future plans?

I’m continuing to create work in this style, shooting and controlling the scenes. I’m also continuing to capture this rapid modernization movement that China is still experiencing. I’m currently in the process of shooting demolitions, and Hongjie Ma and I are expanding our “Family Stuff” series to produce into a book in the near future.

Where do you feel the direction of photography in China is going?

This interview was conducted and edited by CYJO
Interview Translator: Yanyan Liu