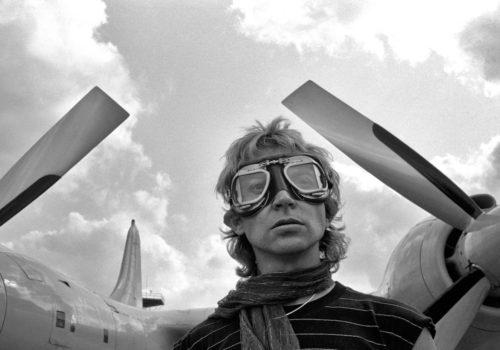 The Polka gallery presents the English photographer and guitarist Andy Summers.
Born in 1942 in Blackpool, northeast of Manchester, Andy Summers was part of the rock group The Police with Sting and Stewart Copeland.
But photography has always had a place in his life.
“As a child, there were two big suitcases at home full of photos that fascinated me, he recalls.
Small ones, in black and white, with their cut-out borders, portraits of people that had passed away…”
As a teenager, he earned his pocket money as a beach photographer.
But it did not last. “I only wanted one thing: to be a musician. I was just thinking about that. It was an obsession.”
It was during a tour of The Police in 1979 that he picked up his cameras.
Without training, the autodidact learned by looking at thousands of images: those of Henri Cartier-Bresson, Robert Frank, Gary Winogrand… Andy Summers first immortalized his life as a rock star.
Part of the photographs in the “Harmonics of the Night” exhibition show the delirious energy of the spectators, the bustling cities on the tour programme, the life of the group and their nocturnal excursions…
Andy Summers takes us on stage and behind the scenes with the group, boarding the bus during trips between two concerts, and enjoying the moments of respite between shows.
“Being part of a band is like living in a submarine,” he says today.
Photography give him a breath of fresh air.
His images made the legend of The Police, but Andy Summers also stake pictures for his own pleasure.
Snapshots of road trips in the middle of American deserts, shots of hotel rooms with unmade beds, bodies of naked girls that collapsed near a guitar, reliefs of carousing in the early morning, delirious fans…
For the exhibition, the interdisciplinary artist takes us from the Bolivian Altiplano to the narrow streets of Tokyo.
With a keen eye for surreal detail, he captures magical moments that fade into the night or disappear in the blink of an eye.
Summers develops a dense visual diary, between minimalist compositions and exacerbated black and white stories.
For forty years and according to his travels, Andy Summers has combined his two passions, music and photography, with the same high standards.
The musical quality of an image remains its only compass for judging accuracy: taking a good photograph is like playing without a false note.
Alongside his photography exhibitions planned across Europe, Andy Summers will tour Europe in 2022/2023 with his multimedia show “Harmonics of the Night”.