Planches Contact – Deauville : The chapel of Bettina Rheims with the collaboration of Marie-Noëlle Perriau 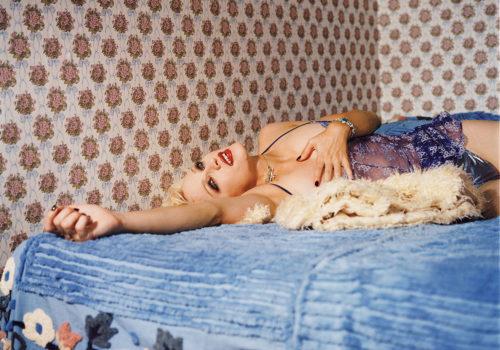 She places women, anonymous or famous, at the heart of her work. Through her photographs, she questions the representation of gender, the construction of a new image of femininity that shakes up the codes of eroticism, beauty and the imperfections of the female body. Female Trouble (1989), Chambre Close (1992), I.N.R.I. (1998) and Shanghaï (2003), all three produced in collaboration with the novelist Serge Bramly, Héroïnes (2005), Gender Studies (2012) and Détenues (2014) are among her most famous series. Many institutions have offered retrospective exhibitions of her work: the Kunsthal, Rotterdam and the Moscow House of Photography, Moscow (2006), the C/O Berlin and the FORMA, Milan (2008), the European House of Photography in Paris and the Fotografiska Museet in Stockholm (2016).
She has published more than 20 books supplemented by a retrospective of her work published by the Editions Taschen which brings together more than 500 photographs taken during 35 years of her career. In 2018, the Gallimard publishing house published the Détenues series in the prestigious Blanche collection. In 1995, Bettina Rheims made the official portrait of the President of the Republic Jacques Chirac. He decorated her with the Insignia of Officer of the Legion of Honor for all of her work in 2007; she was promoted to the rank of Commander of the Legion of Honor in 2013. In 2016, she was elevated to the rank of Commander of the Order of Arts and Letters, and promoted to Grand Officer of the National Order of Merit in 2018 Bettina Rheims lives and works in Paris.

On the occasion of this edition of Planches Contact, Bettina Rheims, inspiration and friend of the festival, is setting up her La Chapelle project at the Point de vue. In the 90s, she photographed American celebrities for Details magazine. From this work, was born in 2018 the installation La Chapelle, developed in collaboration with the scenographer Marie-Noëlle Perriau, and already presented at the fashion and photography festival in Hyères, Geneva and Lille.

Project presented with the complicity of the Institute for Photography of Lille.

“This original scenography presents photos of stars, icons from the 90s, lacerated, intertwined and exposed from floor to ceiling. Bettina Rheims thus invites us to a real immersive dive into underground L.A.” Laura Serani