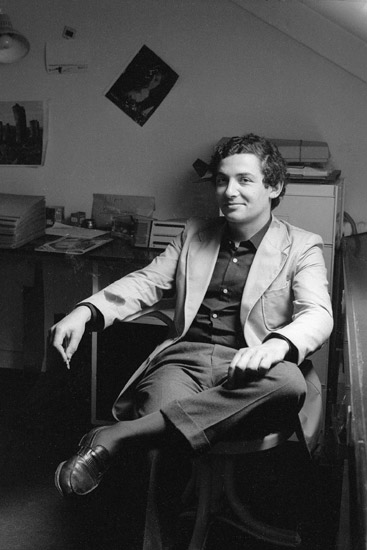 Newly arrived in Paris, I met Pierre de Fenoÿl in 1970. I was sent to see him by someone I had shown my portfolio to. I was 26, Pierre was 25. I thought he was considerably older, with his well-cut suit, his tie and his big cigar. We hit it off immediately, and became fast friends.

Pierre had one of the best eyes for photography that I had ever come across. He understood pictures, he felt them, he loved them. I have no idea where he got his passion and his talent; he didn’t come from a milieu that was particularly interested in photographs, or in art in general. It was just a natural fit, I guess. He had worked in the archives in Magnum, especially with the photographs of Cartier-Bresson, which no doubt helped his development. He also took quite good pictures himself, about which he was entirely unpretentious.

When we met, Pierre was running a small photo agency cum gallery called Vu, owned by a Swiss publisher. I was quickly and tacitly co-opted, like William Klein, Guy Le Querrec, Claude Raymond-Dityvon, Martine Franck and others. Each of us had his or her own particular relationship with the agency. Apparently Pierre had almost landed HCB, too, when Henri  was having some trouble with Magnum. For the next few years we did everything together, running in the same crowd. Pierre was warm, sophisticated and funny, and a lover of the good things in life – a great friend. He often took me to Brittany to meet his family, and was one of my real introductions to France.

In 1975 I joined Magnum, and moved back to New York, so there was a hiatus of a couple of years in our friendship. When I came back to live in France again, Pierre was working at the photography department at the Centre Pompidou, directing the new Centre National de la Photographie. It was a perfect job for him, where he could put his ideas about pictures into practice, and develop a real French presence in the international photographic world.

When I came back from another long trip to New York in the late seventies, things were starting to go badly at the Centre National. There was apparently a lot of infighting and political pressure. Pierre was getting more and more frustrated, and when the Centre moved to Lyon against his wishes and advice, he left. With a young wife and daughter to care for, and his hopes disappointed, he became bitter and alienated, first from the Parisian photographic scene and then from the evolution of France and the world in general. Conversations with him became less interesting, more one-sided tirades than the rich exchanges of the past. I couldn’t get through to him; he had become a kind of political ideologue with a philosophy that I found disturbing. In 1982, after not having seen each other for some time, we got together for lunch, a reunion of old friends. Little by little things began to degenerate, and I wound up listening to a furious litany of accusations, both political and personal, that left me profoundly shaken. I got up and left, and never saw Pierre again.

Paradoxically, the subsequent period of his life – the self-exile to the south of France, the bitterness, the enforced idleness – was also the most productive for Pierre photographically, when he really developed his artistic vision. He recycled his pain into his art. I’m very sad that I could no longer share it with my friend, that I could no longer see the old glint in his eye.

In the 1970s, the contemporary photo world was booming. There was an atmosphere of passion and creativity that would go on to change the landscape of classical photography.

In this setting, a traveling exhibition devoted to three photographers with different methods, organized by the great contemporary photography connoisseur Pierre de Fenoÿl and the Pompidou Center curator Alain Sayag, was a great initiative. It brought new creation in photography to countries around the world. The same thing was happening in Italy with Progresso Fotografico and Fotografia Italiana, in Yugoslavia with Spot, in England with Creative Camera, and in Spain with Carlo Serrano and Pablo Perez Minguez’s magazine Nueva Lante. Indeed, Europe was waking up and trying to prove that contemporary photography wasn’t limited to America, even though what they were doing in the US was truly fantastic.

The overview of three “young” photographers conceived by Fenoÿl was wonderful, visually, because it matched the the modernity and purpose of the photographs. We owe Pierre our thanks, and we miss him greatly.

I started wanting to take pictures after seeing photos by Lisette Model (Nice), William Klein (Tokyo), Bill Brandt and Henri Cartier-Bresson (Geometry) in American magazines. Outside of a few pictures from these “four” heroes, I knew very little about photography. Towards 1970-71, I met Pierre, then director of the Agence VU. I went there, trembling, with a box of slides. I immediately felt that he was an “ally.” He intimidated me even though he was kind and encouraging. I don’t remember anything else, just a good feeling.

The photo world back then was very different from today. There was quite simply nothing—no galleries, no photo museums, very few books—which allowed for a lot freedom. Our generation wanted something else without quite knowing what it was. Pierre was very important in that. So-called “humanist” photography reigned supreme, and Pierre put together a wonderful exhibition, Burk Uzzle, Les Krims, Duane Michals. In 1975, the Centre Pompidou was under construction. Its director, Pontus Hulten, had him organize an exhibition that would tour Europe. He chose Richard Kalvar, Bernard Plossu and myself.

“Photography without apparent motive,” he wrote in the catalogue. Soon after, he invited me to exhibit at the Musée National d’Art Moderne. The selection of photographs was done quickly. Not once during these years did he ever talk to me about his own photographs. I never even saw him with a camera! One day, he invited me to the Centre Pompidou, saying that he, “wanted to show me something.” Upon arriving, I saw him hanging photos of Egypt, magnificent photos, and I asked him, “Who did this?” “Well,” he said, “I did.”

I was amazed. I liked his discretion, modesty and strong opinions. We saw each other a few years later. He was going to publish collotype portfolios and wanted me to come see the quality he had achieved. Leaving, on the sidewalk outside Les Gobelins, I turned around, and he waved to me. (He had just given me one of the Egyptian photographs as a present.) And that was the last image I have of him: his moving, somewhat elfin presence on the sidewalk. When I think of him, that’s the image I see. It’s difficult to describe but it was incredibly touching.

*On the ground floor of the VU gallery building was a showroom. Sometimes the tapestry gallery, La Demeure, exhibited photographs by Atget, Sudre or Sieff.