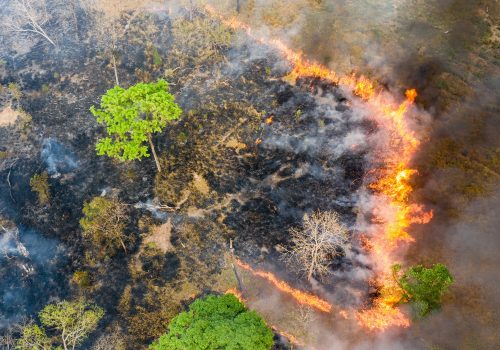 “I was motivated by the coronavirus pandemic to create this new series of video interviews,” says Alison Stieven-Taylor, a long-time correspondent for L’Oeil de la Photographie and the publisher of the blog Photojournalism Now.

“I was keen to explore how photojournalists were impacted by the pandemic and to talk about specific bodies of work. The series has presented the opportunity to seek out photojournalists who are doing important work on social issues, which is the focus of my academic work. I’m thrilled to be able to give these stories another platform through which to reach audiences.”

“Sean Gallagher creates powerful stories that address important environmental issues that of course have serious social implications. The first time I wrote about Sean’s work was back in 2013,” says Stieven-Taylor. “That story was about his project The Toxic Price of Leather which documented the devastating impact, on both humans and the environment, of the leather industry in Kanpur, India.”

Stieven-Taylor’s interview for Photojournalism Now: In Conversation canvasses Gallagher’s work on biodiversity and environmental degradation. For over a decade, Gallagher has trained his lens on the climate crisis approaching the story from various angles. His work on the impact of climate change on the island nation of Tuvalu which includes a short film, limited edition magazine, and photojournalism stories, brings into stark relief the threat of rising tides on vulnerable populations. In his most recent project, funded by the Pulitzer Center, Gallagher documents the devastation of natural forests in Cambodia.

Gallagher started his career in China

Gallagher travelled to China as an emerging photojournalist in 2005. At that time, he had just finished an internship at Magnum Photos’ London office. He used a small grant from Magnum, which was aimed at kickstarting his career as a photojournalist and headed to Beijing.

“I shot a few stories, went back to London and managed to sell them,” he says. Editors began to ask when he was going back to do more stories, so the following year he returned to Beijing and has been based there ever since. In those 14 years Gallagher has focused on China, but also on other countries in Asia specifically looking at environmental issues.

“My academic background is actually in sciences,” explains Gallagher, who is also the founder of the Instagram feed, @everydayextinction. “I studied Zoology at university and had a real interest in natural sciences, biology and the climate. Very early on I thought about how I could combine my interest in environmental issues with my passion for photojournalism.”

In the early 2000s climate change stories were given little attention in the mainstream media. Gallagher says he “spotted a gap in the market so to speak” and began to carve a reputation for covering stories on biodiversity, the environment and climate change.

“I really wanted to use photojournalism to communicate these issues,” says Gallagher. “The longer I have stayed in Asia the deeper my understanding of these issues has become and the more passionate I am about trying to understand what is happening here and bringing these stories to light.”

As a freelancer, Gallagher works with mainstream media  around the globe. He also creates his own publications. His work on Tuvalu was self-published as a limited-edition magazine which sold out quickly, and he has created a similar edition for his latest project, Cambodia Burning.

In the interview for Photojournalism Now: In Conversation, Gallagher shares his experiences documenting deforestation in Cambodia, and talks about his approach and his hopes for Cambodia Burning, which also features a short film.

“This film is a product of my eighth collaboration with the Pulitzer Center, this time to report on the environmental crisis in Cambodia caused by deforestation and forest fires,” he says.

Gallagher is constantly looking for new ways to tell visual stories. The film Cambodia Burning “tells the story of Cambodia’s forests through the eyes and words of a Cambodian poet-writer. Using only drone cinematography, the film transports you above and through the forests, providing a truly unique viewpoint of the devastating transformation and of the changes taking place.”

“In pre-release, the film has already been shortlisted both in the Earth Photo Awards and Drone Awards. Images have also been featured in National Geographic and Yale360.”

Other interviews in the Photojournalism Now: In Conversation series feature Robin Hammond and Renée C. Byer.

To find out more about Sean Gallagher’s work visit his website.