Photography in Capri : Villa San Michele, the Charterhouse of San Giacomo and more 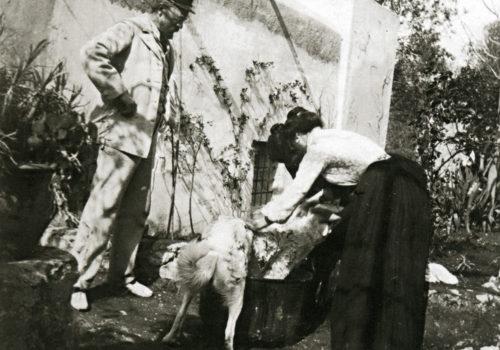 A jewel emerging from the blue sea in the Gulf of Naples, an island with a lush nature beloved by writers and poets. Capri, reina de roca… this is the incipit of the poem Pablo Neruda dedicated to the island when he arrived there exiled. Capri was a source of artistic inspiration for Axel Munthe, Francis Scott Fitzgerald, and Marguerite Yourcenar, to mention a few. It was also a favourite destination for famous photographers, like Wilhelm von Gloeden and Herbert List (contributor to Vogue and Life, who left us black and white shots of Capri in the 1930s), Ferdinando Scianna and Giovanni Gastel.

In the footsteps of Axel Munthe

Let’s start with Anacapri, one of the two municipalities of the island. It’s a fascinating place that offers walking trails, a chairlift to reach the peak of Mount Solaro and the magical Blue Grotto (Grotta Azzurra) sea cave, with its water glowing a pure blue. Furthermore, you can enjoy a panoramic view of the Garden of Eden, created in maiolica in 1761, that takes up the entire floor of the Church of San Michele. Same saint’s name for the dream home of the Swedish physician and author Axel Munthe (1857–1949). Villa San Michele, with its garden, is a must-see place that has much to offer in terms of photography. Munthe recounted his life and the creation of the villa in The Story of San Michele (1929), one of the first international bestsellers in modern times.

The Villa houses quite an important art collection, including Roman and Egyptian sculptures. One of these is the fabled 3200-year-old sphinx. The Villa also preserves a quite interesting photographic collection (it can be consulted upon written request), with images dating from the late 19th century to the early 20th century, a veritable historical album, dealing with Axel Munthe, his life at San Michele and the personalities who frequented this enchanted place. Among them, to name but a few: King Gustav V and Queen Victoria of Sweden, and the photographer and art collector Giuseppe Primoli. Other sections refer to architectonic views of the Villa and botanical-naturalistic aspects of the garden. In the garden, where every season has its flowers and scents, Lotta Antonsson exhibits the show I’m a Woman in the Olivetum pavilion. They are almost disturbing images that embody and break stereotypes of female beauty (with a focus on the 1960s and 1970s), collages made by complementing vintage photos from fashion and erotic magazines with natural objects such as stones and shells in order to reflect on the ephemeral nature of things, questioning the objectification of women. The exhibition is part of The Salon of the Sfinx cultural festival, which explores “conflict” as a theme, described through art, theatre, literature and music.

The photographic plates of the Centro Caprense Ignazio Cerio

Until the end of the 19th century the only communication route between Anacapri and Capri was the so-called Phoenician Steps with its 921 stone steps built by the ancient Greeks. You can still use them to get to Capri (or you can use the more comfortable carriageway). Once you reach the beating heart of Capri, the Piazzetta, you can visit the Centro Caprense Ignazio Cerio, which enlivens the island with cultural activities and its more than 20,000 historical and naturalistic exhibits housed in the museum. The Library of the Centro, specialized in the history of the island, was founded by Edwin Cerio in memory of his father Ignatius, a physician who moved to the island in the mid-19th century and had high-profile international scientific relations. Alongside the over 6,000 volumes and 4,000 manuscripts, it preserves the Arturo Cerio photography collection, with around 600 plates dating back to the early 1900s. The Cerio collection (consultable upon written request) bears witness to the ‘romantic’ Capri: classical views, the Faraglioni and the Piazzetta as well as personalities and family groups. The plates are accompanied by prints dating back to the 1990s, when they were restored. The iconographic fund also includes a miscellany by various authors up to the 1980s.

The island of Capri offers unmissable insights for those who photograph for profession and/or passion, but also hosts a Photography Festival. The theme of this just-ended 14th edition was Mediterranean vision. The images, narrating the quintessence of the Island of Capri, were exhibited in a magical place, the Certosa di San Giacomo, built in 1371. The photographers, “with their personal artistic visions, composed an exhibition poised between space and time. Through a precise fusion of different expressive mediums and approaches, they managed to revitalise the iconographic perception of the Capri landscape”, Denis Curti, the director of the Festival says. On show there were the projects, including the portfolios by Davide Esposito, Simone Malgrati e Claudia Vanacore, selected among the 130 photographers from Italy and abroad who participated in the open call (we will update you on the upcoming open call for the 2023 Festival).

The Photography Festival is promoted by Fondazione Capri, in collaboration with Direzione Regionale Musei Campania, Ministero della Cultura. Since 2009 Fondazione Capri has been organising exhibitions of well-known photographers who have immortalised the island, like Ferdinando Scianna, Giovanni Gastel, Mimmo Jodice, Olivo Barbieri and Maurizio Galimberti.