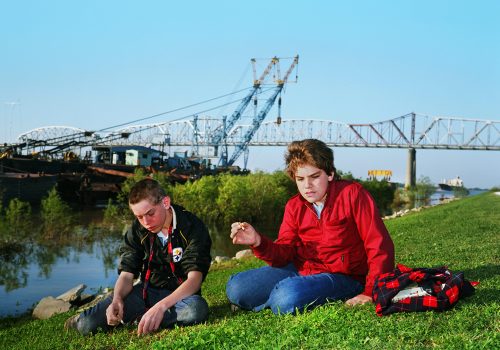 As part of the ‘Photobiennale-2020’, the Multimedia Art Museum, Moscow presents ‘American Power’ an exhibition by Mitch Epstein, one of the most influential contemporary American documentary photographers.

When the New York Times sent Mitch Epstein to photograph demolition of the town of Cheshire in Ohio State, Mitch Epstein he had no idea this commission would mark the beginning of a long-term project.

‘I was sent to photograph the disappearance of the town of Cheshire, Ohio, after it had been bought out by American Electric Power,’ Epstein recalls. ‘The 200 or so residents had been complaining of health problems due to contamination from the local AEP coal plant. Nearly everyone took the company’s money to leave and never bring a lawsuit against it in the future. I saw houses getting razed in a matter of minutes and homeowners wandering around the ruins of their former life looking for something to salvage. Later, back in New York, I kept thinking about the erasure of Cheshire.’

Epstein decided to launch a visual investigation of energy production and consumption in the USA. For the next five years he travelled around the country and photographed all kinds of power plants: coal, nuclear, wind, solar, hydroelectric, etc. But the ‘American Power’ series is not just a story about energy diversity in the first decade of the 21st century. Above all this is a study of American society and, simultaneously, an expression of the civic position of the photographer, who focused attention on the observance of personal rights and freedoms in the country, as well as ecological problems that arise from the greed of industrial giants and their indifference to the environment.

‘I became fascinated by the pun of power — electrical power came from political power, which came from corporate power — and civic power met up against all that. The theme started out small — electrical energy in the US — and swelled up pretty quickly into an exploration of the very meaning of power in the United States,’ says Mitch Epstein.

As Epstein constantly travelled around the country he encountered various obstacles to his project. In the wake of the terrorist attacks of 11 September 2001 local police were often sceptical about the presence of a photographer making images of power stations, and he was arrested several times. Mitch Epstein writes that with his new project he found himself pressed up against the edge of America’s fundamental freedoms. The open society that he had taken for granted for 33 years was no longer a given.

‘The pictures are harder for the viewer to dismiss because they’re carrying, vibrationally, my personal experience of being shut out, frisked, terrified, and pissed off. That’s more engaging than a didactic political message,’ Mitch Epstein says.

In the series ‘Recreation, American Photographs’, his anthology of American life, and ‘Property Rights’, about the construction of gas and other pipelines on the territory of American Indian reservations and US national parks, touching on the serious topic of a people’s primordial right to land, Mitch Epstein seeks to find and convey the truth about how Americans live, and what price they are willing to pay to defend central principles laid down in the US Constitution.

Mitch Epstein was born in 1952 in Holyoke, Massachusetts. In the 1970s he was among those exploring the new artistic possibilities of colour photography. His work is featured in many major museum collections, including the Museum of Modern Art, Metropolitan Museum of Art and Whitney Museum of American Art in New York; the J. Paul Getty Museum in Los Angeles; the San Francisco Museum of Modern Art; and the Tate Modern in London.

In 2013 the Walker Art Center in Minneapolis commissioned and premiered a theatrical rendition of Mitch Epstein’s ‘American Power’ photographic series. A collaboration between Epstein and cellist Eric Friedlander, the performance combined original live music, storytelling, video, projected photographs and archival material. Epstein and Friedlander have also performed at the Wexner Center for the Arts, Ohio (2014), and the Victoria and Albert Museum, London (2015).

Mitch Epstein was granted a Guggenheim Fellowship in 2003. In 2011 Epstein won the Prix Pictet for the ‘American Power’ series. He was awarded the Berlin Prize in Arts and Letters in 2008.

Epstein has worked as a director, cinematographer and production designer on several films, including ‘Dad’, ‘Mississippi Masala’ and ‘Salaam Bombay!’

The project is presented by Galerie Thomas Zander