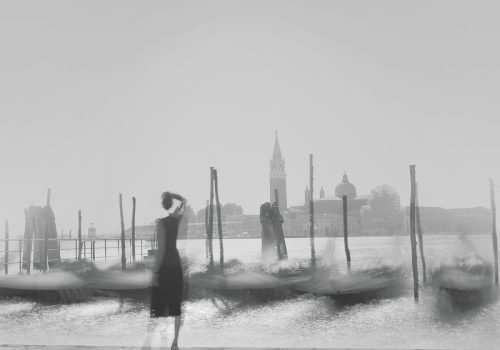 As part of the  Photobiennale-2020  the Multimedia Art Museum, Moscow presents City of Shadows, a retrospective exhibition by Alexey Titarenko, one of the outstanding Russian photographers who began work in Leningrad at the dawn of the 1980s. Since 2008 Alexey Titarenko has been living in New York, actively cooperating with many galleries and museums in Russia, the USA, France and other countries.

Alexey Titarenko was born in Leningrad in 1962. Since childhood he was drawn to literature, music and photography. Titarenko’s first shots with the children’s photography club at the Kirov Palace of Culture were taken using an old pre-war Komsomolets camera. ‘It was simple, even rudimentary for medium-format film, but to me it seemed complicated, impenetrable, yet at the same time promising: what if this black box could capture the brief moments of reality that made me so happy?’ recalls the photographer. Most of his pictures were of Leningrad, which for him was inextricably linked to the work of Dostoyevsky. He was disappointed with the results of his shots — the images in no way conveyed the mystical atmosphere of the city. But the young photographer continued his self-improvement by reading, listening to classical music, translating from French and studying books on photography.

By now with a new camera, the Soviet version of the Leica, Alexey Titarenko began attending photojournalism classes at the Kirov Palace of Culture. The same building housed the famous Zerkalo (Mirror) Photo Club, where Titarenko became a full member at the age of 15. The club attracted representatives of the Leningrad intelligentsia such as musicians, artists, doctors and engineers, providing almost the only place in the city at that time where you could learn about Leningrad nonconformist artists and modern Western art. For the young photographer it became his universal educational platform.

Towards the end of the seventies his Zerkalo friends, knowing that Titarenko was fluent in French, asked him to translate Dawn Ades’ book ‘Photomontage’. This book made a huge impression on him — he discovered a way to express his artistic vision through photography. By radically ‘cutting’ photos from his own archive of city images in the spirit of Dostoyevsky, he made the first series of photomontages, ‘Leningrad From Another Side’.

In the early 1990s the country was enduring one of the most powerful political, economic and existential crises of the 20th century. Feeling a great desire to express sympathy for people who were once again driven to the brink, Alexey Titarenko found a new way to visualise his emotions and feelings with the help of photography — he chose the technique of long exposure.

‘Depicting the crowd as a general movement with erased secondary movements, the metaphor created by the long-exposure effect made evident certain fixed elements that would otherwise have been drowned in an abundance of details and faces … Similar episodes came to mind: wars and revolutions the Russians had suffered throughout their history. It was as if one photograph had embraced a decade, even a century. I felt that my childhood dream of capturing on film a state of the soul or a singular impression experienced in the street had come true — reality as I had felt and imagined it had been recreated,’ recalls the artist. This led to the project ‘City of Shadows’, for the creation of which Alexey Titarenko constantly turned to Dmitri Shostakovich’s Concerto No. 2 for Cello and Orchestra. Walking around the city listening to his music, the artist always felt that St. Petersburg perpetually offers illustrative material for the music of the great Shostakovich.

According to the author, the effect of long exposure in photography can be compared to methods of musical interpretation, when a musician performing a work draws the attention of the listener to those elements that previously might have gone unnoticed.

The author remains true to his method. Alexey Titarenko uses a large-format analogue camera and develops the film himself. He works on each print manually, using partial bleaching, tinting, solarisation and repeated veneering to make each image absolutely unique and inimitable, which can sometimes take more than a week.

‘Like a musician with his or her score, I must interpret each negative, considering it as a foundation on which to build, associating the work each time to a creation that is somewhat different, a new message that is unexpected by the public, avoiding weariness and preserving fresh perception so that each new print provokes at the very least a surprise, if not a shock,’ writes Alexey Titarenko.

Titarenko is guided by the same principles when producing each new series. Every city, be it St. Petersburg, Venice, Havana or New York, with its inhabitants as well as its literary and musical heritage, has a direct impact on the images created by the artist. Beginning with a story, Alexey Titarenko arrives at a deeper and more subtle understanding of space.

Alexey Titarenko is a writer who preserves in his ‘photo novels’ a universal story with feelings and emotions that are understandable without words. ‘These emotions comprise the main themes of my photographs, turning the most documentary of them into elements of a novel — not a reportage, but a novel, the central theme of which is the human soul, its modulations inspired by a look at human events, with their major or minor vibrations,’ he explains.

Alexey Titarenko has participated in many Russian and foreign festivals, including the Moscow ‘Photobiennale’ (2002), the Rencontres Internationales de la Photographie d’Arles festival (2002), the FotoFest International Biennial in Houston (2004, 2012), and others. Alexey Titarenko’s works feature in the collections of major museums across the USA and Europe: the Philadelphia Museum of Fine Art (USA), the Museums of Fine Arts in Houston and Boston (USA), George Eastman House (USA), the European House of Photography (France), the Musée de l’Elysée (Switzerland), etc.