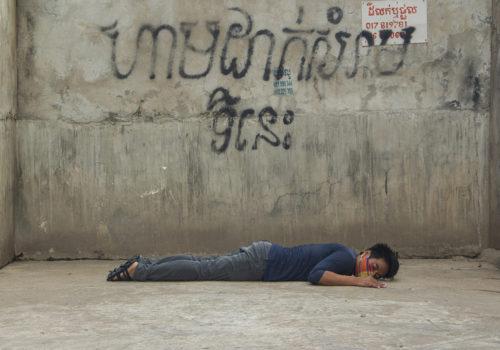 The 13th edition of the Photo Phnom Penh festival will be held until November 27. Its artistic director Christian Caujolle presents it this way!

For its thirteenth edition, the Photo Phnom Penh festival remains faithful to its principles and, above all, to the need for exchange. Exchange between Europe and Asia, but also within Cambodia, with the organization of the “Intersection”, which will honor four young women from Phnom Penh and Siem Reap, and who will work on common themes.

There are many allusions to travel, among others, the proposal of Claudine Doury who, twenty years apart, visited the banks of the Amur River and offers them to us on the wall of the French Embassy.

With, also, the proposal of the Franco-Chilean artist Enrique Ramirez whose work is haunted by the sea and who comes to create an original work in Cambodia for the festival. This work, presented in the gallery of the French Institute of Cambodia, will dialogue with the images sent for the photo contest organized with the support of the Delegation of the European Union in Cambodia which will deal with “Water in danger”, problematic very real in the country but also in many the countries of the world.

They will dialogue with the recent and unpublished creations of the Cambodians Jean-Baptiste Phou, whose square, black and white self-portraits are a novelty on the scene of the country, with the views of the city “at dusk” by Channal Sean, the self-portraits in the deserted city in times of confinement by Vannak Khun and the creations of four young women working in collaboration on questions related to food. The Asian presence will be completed, between sculpture, photography and installation, by the proposals of the Singaporean Zen Teh who invites us to reconsider our relationship to nature and among others to the forest.

On the outside gate of the Institute, large-format photographs will mark the centenary of the birth of King Norodom Sihanouk, a key figure in Cambodian politics from 1941 to 2004.

One of the great novelties is the presence of a guest country, a principle that we would like to be able to renew each year. This year, the Swiss Confederation will occupy the spaces of F3, the Friends Future Factory, in the heart of the capital. With ten artists, some famous, others very young. In an original presentation, which leaves room for the great tradition of Swiss graphic design, and which is also a great opportunity to take stock of current practices in the field of images. During one of the evenings of the festival, a projection of videos will complete this set. Thanks to Marie Le Mounier and Beat Streuli for having designed and carried it out, with the support of Pro Helvetia.

Conferences, reading of portfolios, traditional tour of the exhibitions in a tuk-tuk as well as three screening evenings will complete the program of exhibitions.