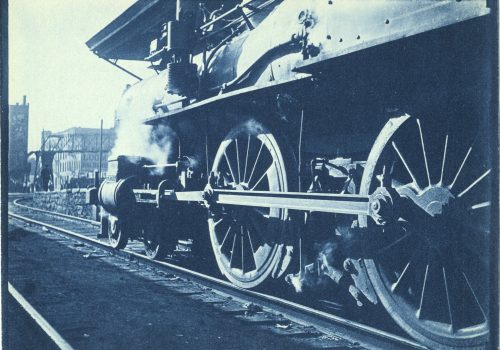 A collection of rare early modernist photographs of American railroads are exhibited at The London Photograph Fair, 19 – 20 May at The Great Hall, King’s College, London.

Around 1977 when these images first came to my door, I immediately recognized the work of a talented artist. Of the more than 300 Cyanotypes over 100 exhibited the qualities of a trained and creative eye. But none were signed and the ones that exhibited writing on the back gave little information that could lead to identification of the maker. It appeared to me at that time to be a near-hopeless endeavor to identify the creator, and therefore decided to sell them.

I divided the collection into three groups, each reflecting the best of the work and kept one group for myself. The other two sold at Sotheby’s in 1979 and 1980, and from that moment I regretted selling them. Then one day at the Emeryville Image Show they resurfaced. The original buyer of both lots had kept them together until 2004 when I was lucky enough to buy the group back, minus a few that had been sold by the interim dealer. Again with some luck I was able to purchase most of the images back that had already been sold. Unfortunately one extremely important image was not among the collection and has yet to resurface. The missing image was the cover image of the first Sotheby sale and is the right view of a 2-part panorama shown to the right.

This volume is not meant to be a final work on the subject, but merely a sample of the amount of information I have uncovered up to this point and the outstanding quality of Masters’ photographic images.

There are several key pieces of information still missing I would like to find before publication. These are not requirements to publication, but are none-the-less important elements to understanding Masters and his photographic work.

One question is how Masters came to photography and where he sought inspiration. We can see from MIT publications he was already interested in photography while still a student. This interest continued and blossomed in Wilmington at Howard Pyle’s school and later after he moved to New York in 1905.

Another is the recollection by a grandson of visiting Edward Steichen with his grandfather who lived near each other in the 1950’s in Connecticut. Were they friends from Masters’ days in advertising in Manhattan, or through photography or just neighbors in Connecticut?

We see that during Masters’ early years in art, his path criss-crossed some of the most prominent figures in American illustration. Masters was a talented artist, but unfortunately not destined to achieve the fame of those he knew, taught or studied under such as Charles Herbert Woodbury, Eric Pape, Howard Pyle, N. C. Wyeth, Maxfield Parrish and John Schoonover to name a few.

Where Masters stands out is in the brilliance of his photographic imagery which touches on styles in photography yet to come in the 1910’s, 1920’s and 1930’s. Had Frank Bird Masters believed himself to be a photographic artist, he would already be among those names his work parallels or predates such as Steichen, Strand, Steiglitz, Sheeler and Walker Evans to name a few. I believe Masters is a major undiscovered artist of the 20th century, but for his photographic work not his illustrations!

Originally there was no identifying information on the photographs themselves that directly pointed to a specific maker. Closer examination of the inscriptions noted Wilmington, Delaware. I planned a visit to the Delaware Historical Society in hopes of attributing the work. Also because of the predominance of railroad images, correspondence with railroad collectors and writers suggested Philadelphia as a possible source of information. Specifically the images of a Quaker Meeting Hall and the mention of being “… near the studio” pointed as well to Philadelphia as a location.

​In Philadelphia, a collection of albums from the 1930’s of every meeting hall in the northeastern United States did not contain the building shown. Nor did the albums of railroad images at the Library Company of Philadelphia contain any of Masters’ views.

The visit to the Delaware Historical Society was far more successful. The historian was immediately able to suggest the Pine Street Friends’ Meeting Hall as the one in the image and had a copy image of the building, since demolished. It was indeed the same. Then after reviewing city directories to find a studio near this location and comparing the different photographers’ work in the archives, none matched.

The Delaware historian then mentioned that a local resident had already compiled a list of all Wilmington photographers from the 1840’s-1900. I contacted him and heard him say that based on the description of the photographs he believed he knew the maker, Frank Bird Masters, one of the students of Howard Pyle. He then supplied me with the data card on the next page for Masters. The handwriting matched and suddenly there was not only an artist’s name, but also his education and some references to published work.

From that moment basic research went extremely fast. On the same trip a visit to the New York Public library produced residences from the 1920 and 1930 census as well as the names of his spouse and children. The 1920 reunion publication for the MIT class of 1895 produced the images on the right resulting in the identification of the self-portrait above right.

It is not yet known how Frank Bird Masters became interested in photography or even illustration for that matter. We can see from frequent mention in the MIT journal that he participated in both photographic projects and graphic arts competition, notably winning first prize for a poster design. Soon after graduation he began teaching drawing at Mechanics Arts High School in Boston and most probably continued his pursuit of photography as well. It is very interesting to note that the most important American illustrator of the early 20th century, N. C. Wyeth, began studying at Mechanics Arts High School in 1895 and is about the same age as Masters. They both studied at Eric Pape’s Art School in Boston and later both studied with Howard Pyle at his school in Wilmington.

Relatively early in his career Masters chose illustration and advertising over engineering. His artistic works that have survived are definitely pictorial in character and primarily landscapes. By the time he reached Howard Pyle’s school in 1903 he might have already been moving away from his earlier subjects to concentrate on story illustration. He lists Curtis Publishing’s advertising art department as his employer in 1902 just prior to starting with Pyle and not long before doing his first illustration work for their Saturday Evening Post in late 1903.

Soon, if not immediately after concluding at Howard Pyle’s school, Masters moved to New York City and worked in advertising until the outbreak of WWI when he began work for the Navy designing anti-submarine camouflage for ships. For the moment nothing more is known about Masters’ activities after 1918 except for his work on Edward Hungerford’s railroad volumes in 1930 and 1940.

Thanks to the internet new material on Masters continues to surface. Through time, I have assembled all the books illustrated by Masters’ to compare his photographic images to his graphic arts production. While he clearly used the photographs as preliminary sketches for his intended illustrations, the photographs are in many ways better than his illustrative pictures derived from them.

These pages demonstrate how Masters used photographs as inspiration for his illustrations. In some cases he follows the photograph very closely and others uses only specific details from the photographic study in the illustration.

His use of the details also varies from close representation to simply a reminder of how the scene looked with most or all of the elements changed to suit the illustration.

To the right we see Masters himself as the fist-clenched subject. He seems to be most interested in the dramatic chiaroscuro and the positioning of the man’s body and eliminates the remaining details.

On the following page the Saturday Evening Post cover, which appears to be the last one done by Masters, he embellished a rather straightforward photograph with a more dramatic angle and a sky in the color of one of the S.E.P. typefaces. There is a good chance that a photo also exists of the train in the receding angle, but it is not among the images in this collection.

Andrew Daneman is an American photography dealer and collector.