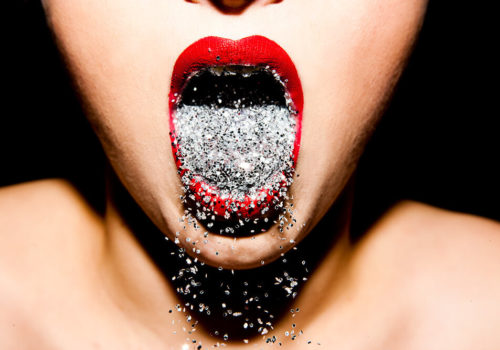 Californian photographer and filmmaker Tyler Shields exhibits a personally selected set of eleven prints at Photo London, in collaboration with his London gallery Imitate Modern. This will be Shields’ Photo London debut and the booth will feature works from the entire breadth of the photographer’s portfolio, beginning with his Glitter Mouth shot in 2012, to his most recent images captured during the global pandemic and made possible by the unusually vacant streets of LA. Some of Shields’ works are displayed such as Under the Rain (2018), an image which Shields’ himself admitted looked even better on film than it did in real life.

“This image would have never happened if we weren’t in a lockdown. The Chateau Marmont is one of the most iconic hotels in the world, and in my almost 20 years of living in Los Angeles, I’ve never seen the front or the driveway of the Chateau empty. Because of the pandemic, the hotel was shut down, no one was there, there were no cars driving up and down.

During lockdown, I was using an old 35mm camera that I hadn’t used in a long time, and I had just a couple of frames left to use. On the way to get these developed at the lab, I figured I’d take the final shots. We drove past the Chateau on the way over and it was completely empty – I was dumbfounded. We took the shot, and afterwards I noticed we were standing just 15 feet from exactly where Helmut Newton died. Without realising, this was a perfect homage to him. We shot three pictures, but I knew within the first shot I had something magical. It was one of those moments when if you’re never willing to go out and take a photograph without having an idea, you might never be surprised, and this image was a beautiful surprise.”

Tyler Shields is best known for glossy, high production, sometimes controversial images that explore themes such as eroticism, consumerism, and fantasy. He has photographed many of Hollywood’s finest, creating images that have caused global sensations such as a gun wielding Lindsey Lohan, drenched in blood and Emma Roberts falling from a window. He deliberately toys with the staged nature of portraiture, generating works that realise the impossible. His images self-consciously manipulate the tools typical of Pop Art, such as use of logos and highly staged characterisation, but add something distinctly new due to his uncompromising cinematic eye that brings Hollywood seduction to the fore.