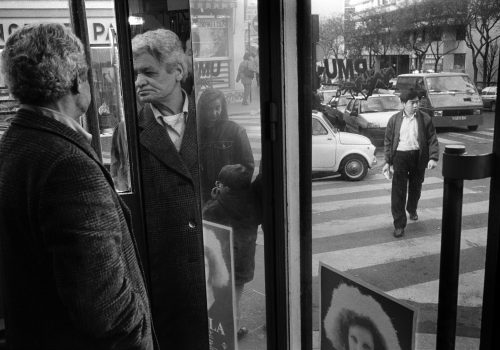 Since its creation in 2015, Photo Doc. fair has always been confronted with reality, but this year is even more special, it brings into play the social link, the link with the living that creation brings into existence, in which we believe and defend.

This is our way of participating with you in building a better society.

Entitled “L’Autre en Je”, this edition favors photographic subjects linked to intimacy and its power of creation, on oneself, on us, on society, revealing the active process of documentary photography. A photograph which, from the political to the self-portrait, explores how the recognition of the other intervenes in the understanding of oneself and is part of the transformation of the world. An intimate, militant, creator and operative on reality.

from November 27, 2020 on the site www.photodocparis.com

“The feeling of the world”

I present some images that have crossed my life, since those of Poor in France, in 88, images made among families helped by the Secours Populaire Français, those of the immigrant home at the Porte des Lilas, in 85, where I accompanied a group of Malians who formed  a cooperative to prepare for their return to Mali, those taken in Belleville in 1993, the district of Paris where I live …

Guest of honor for the 2020 edition

Why show indoor photographs to talk about exile? Because living is what we all have in common. Whether we are nomadic or sedentary, we all live. It is from this common point that I want to get the audience to put themselves in the other’s shoes by observing their place of life.

“I remember when I walked in. It was hot. It was damp. I could hear the continuous streaming of water around me. Diffuse light gradually made me lose connection with the outside world. In the steam rooms I was invisible. Invisible to myself, I became the other “.

The 193 Gallery presents images of the younger generation of Chinese photographers who photograph the intimate. Between sensuality, demand for new freedoms, this new generation denounces censorship, questions social pressure, the brutality of a society or quite simply celebrates life, love and even its singularity.

With Alma Herida, Joséphine Douet has totally stripped bullfighting of its ostentatious traditionalist side. She cleaned things up to such an extent that she was able to venture into territories that no one has ever been close to regarding this subject. Bullfighters reveal their scars to us and invite us into their privacy for a captivating exposure.

“Land of meetings, from the intimate to the political”.

José Nicolas and his guests: Marc Simon, Jacques Witt, Eric Lefeuvre, Jacques Langevin. Five photographers invite us to take a closer look behind the scenes in the life of one of the most popular politicians, Jacques Chirac.

February 2019. Occitan section of the CCI Sud Formation in Carcassonne and Montauban. Whether they want to work in the kitchen, catering, or trade, I had access to the same seriousness and the same carelessness due to their youth … I was then able to find myself a little in them, having been a long time undecided before knowing my way.

I think you can spend your teenage years gently. Life passes. We wait for it. An expectation imbued with accidental poetry, idle sensuality. I did not necessarily seek a truth, it is neither a reportage nor a documentary, but more an author’s work: my vision of youth (idealized, personal) to tend towards a universal feeling, and recall our own teenage stories teenage.

This work unanimously won the Grand Jury Prize and the Audience Prize at the Planche (s) Contact Festival in Deauville in 2019.

Raphael Kessler – The movement of bodies

I have sought to testify to the constant mistakes but also to the epistolary reconciliations that unite and untie our relationships with others as well as with ourselves. Having spent years working on the art of the stage and the body, the emotions that are expressed also have a strong presence in my work.

The project started with you. I remember offering to do something together. You were sensitive to matter. I was sensitive to the body. We shared similar interests and I felt that there could emerge a certain intimacy in which our two sensibilities could be released.

Gustavo Urruty’s photos are an exceptional find, they have remained secretly buried in his archives for the past 30 years. The grace of Gustavo Urruty’s photographic work is born from the intensity of the innocent gaze he gives to the moments, places, situations and what he decides to retain with his camera …

Cyril Bailleul – “In the footsteps of Bill Pickett. American cowboys and cowgirls ”

In 2012, through an unexpected family context, the photographer discovered African-American cowgirls and cowboys and The Bill Pickett Invitational Rodeo (BPIR) in Atlanta. The beginning of a fascination takes shape.

Hugs. The scene is a 5-minute collective embrace, made up of dressed and nude models. Nearly 300 foreign volunteers have embraced each other during meetings organized for 20 years.

Elizabeth Lennard – “A List: a tribute to Gertrude Stein and the French landscape”

Elizabeth Lennard has found notions that she explores in her own work through the texts of Gertrude Stein. The correspondences that are established between her photographs and “A List”, a cubist play by Gertrude Stein, fully reveal the concept of “list” with which the writer has created a sort of virtual multiplication of the landscape.