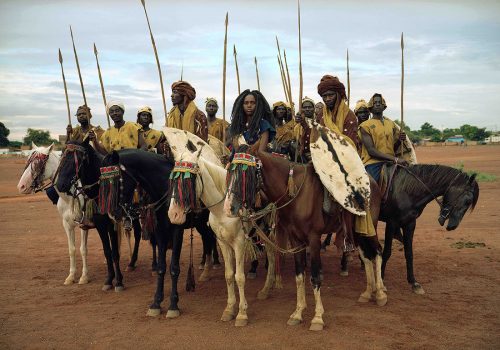 For his first exhibition at the in camera Gallery, Philippe Bordas presents a work on the young Mossi riders photographed in Burkina Faso, from 2011 to 2014. The exhibition includes about fifteen prints.

This spectacular series, with a cinematographic atmosphere, on the edge of reporting and fiction, was made in color film in the streets of Ouagadougou. It forms the last part of a long-term work entitled “Heroic Africa”.

Begun in 1988, this work on “Heroic Africa” ​​includes four series, boxers from Kenya, wrestlers from Senegal, hunters from Mali and the portrait of the Ivorian Frédéric Bruly Bouabré, artist and inventor of alphabet. The first opus of this poetic fresco, the book “L’Afrique à poings nus” (Seuil), about the boxers of Nairobi and the wrestlers of Dakar, received the Nadar Prize in 2004.

In this low and dusty city, horses are kings: they are enthroned and grazed in front of the  miserable houses of the neighborhoods; and rub shoulders with Mercedes or BMW in front of the facades of the rich villas. The horse lives and survives in the heart of the people of Burkina, it is the emblem of the country, it is the soul, if we remember that the meaning of Ouedraogo, the name of the Mossi founder , means “male horse”.

The fabulous cavalry of the Mossi Empire has remained in everyone’s minds. Broken by the French army in 1896, this mythical cavalry has risen in recent years, thanks to a family of virtuoso horsemen and historical research by Burkinabe scholars who have restored the ancestral costumes. Better, young boys and young women cutting a fine figure are riding again in the city and gather for shows, dressed in these outfits. It is these horsemen and horsewomen that Philippe Bordas photographed during several stays in the Burkinabe capital, from 2011 to 2014.

Most of the characters in this photographic series are the direct descendants of the horsemen and amazons of the former king’s army, the Mogho Naaba, whose descendant is still reigning. Every Friday, ritually, he presents himself to his cavalry in full dress.

It is an amazing sight to see these riders in Ouagadougou and the surrounding countryside move in small band, shirtless or in evening clothes, to go shopping, drink a soda or meet friends in a nightclub. As if the ancestral mossi cavalry had for a time come back to life, in the urban chaos, reminding everyone of the equestrian cult of nobility and beauty.

Philippe Bordas was born in 1961 and lives in Paris. Writer and photographer, he attaches himself thru texts and images to those emerging from oblivion, to magnify the figures of a popular aristocracy – reprobated and excluded from Africa and France, from cities and shanty towns, who created a destiny, and invented a style.

As a writer, he is the author of Forcenés (2008) and The invention of writing (2010) published by Fayard, as well as Chant furieux (2014) and Coeur-Volant published by Gallimard. A resident of the Villa Medicis in 1996, regularly exhibited at Paris-Photo, he presented his retrospective on “Heroic Africa” ​​at the European House of Photography in 2010.