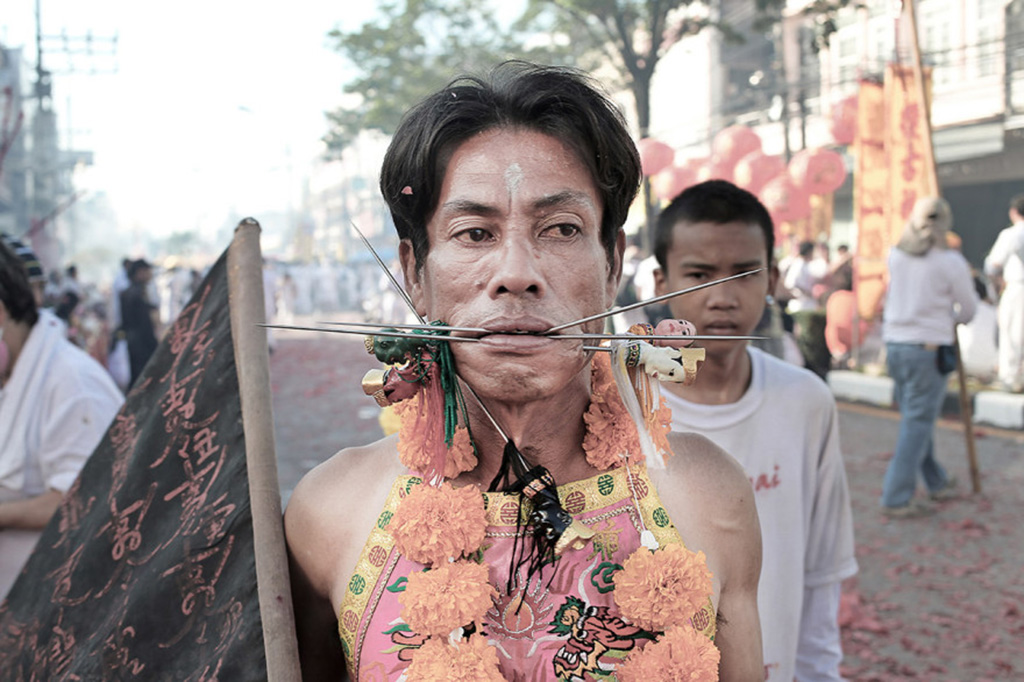 The Vegetarian Festival in Phuket, Thailand has a long and twisted history and, as a lifelong vegetarian, I was drawn to this festival with fascination. It began the way all great festivals begin: a Chinese Opera group gets sick and prays to the gods who respond, and cure them, by committing them to a vegetarian diet. Not exactly the way most of us are converted, but makes for a great story. Eventually, when the people of the region learned how the others were cured, they adopted this lifestyle and started rituals based around this unusual new diet. The aim was, and still is, to free the individuals of evil spirits, and bring good luck, purity, and inner peace. The date of the festival is based on the lunar calendar and is celebrated throughout much of Thailand, particularly in Phuket, for nine days in September or October each year.
The festival is still full of rituals and daily events, but none are more important than those of the Mah Song. A Mah Song is a man or woman that becomes possessed by a deity during the course of the festival and is able to perform superhuman acts, with, of course, the protection of the gods. They bathe in hot oil, climb bladed ladders, walk on coals, and pierce their skin with knives, guns, and other objects. Growing up as a vegetarian, I swear I never did any of those, except I did walk on hot coals, once. These folks are fierce, powerful, fearless, and a huge token of pride for their families and their communities. They are capable of manifesting supernatural powers to free themselves from the pain of their actions and the deity living within them is even said to protect them from any injury. They cleanse themselves of meat consumption for several months leading up to the event and live in a way that is pure of mind and body. Amazingly brave to say the least!
Google a picture of “Phuket Vegetarian Festival” and you are sure to ask yourself, Why? Then you may find yourself calling the airlines and asking about flights to Thailand. Before ever going to this festival, I went to many vegetarian festivals and events; this is much more than that. It is a day that celebrates rituals, beliefs, and all the food one could imagine. As soon as I heard of this, I knew I had to be there to immerse myself in the power and rarity of this event that is unlike any other event in the world. I wanted to be were the world was still sacred; where weird wasn’t weird. In much of the West, crazy has been sanded down into plain; we can really lack that culture that so many peoples still celebrate. The Mah Song must be like no other people on earth. If there are others who can slide a knife through their cheeks while standing on a snake and eating a veggie noodle plate, I want to go there too! Until then, lets celebrate these men and women as the last mythical people of Thailand.
By Phil America(philamerica.com)