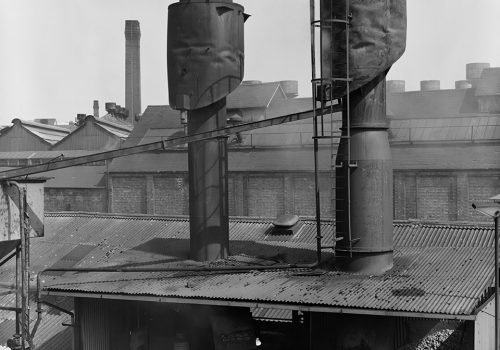 British photographers John Myers and Peter Mitchell are exhibiting together for the first time, with an identity theme of their work and yet little explored.

John Myers himself is behind this exhibition, which captures the transformation of the landscape caused by the brutal deindustrialisation of the North of England in the early 1980s.

We know the importance of these two British authors: Peter Mitchell, portrayed the inhabitants of Leeds in his series “New Denial of the Viking Space Mission 4”, the first exhibition of color photographs in England (1979), rediscovered a few years later at the Rencontres d’Arles in 2016, at the gallery in 2017 and presented from 26/09 at the Charleroi photography museum. John Myers, whose classic black and white work, follows in the tradition of documentary photography, here tinged with a certain austerity, that of Margaret Thatcher’s England.

He recently reissued his entire three-volume work: The Portraits and Looking at the Overlooked (exhibited at the gallery in 2019), and finally The End of Industry, which we’re talking about here.

The theme of the deindustrialisation of the United Kingdom is therefore the backdrop for this exhibition, curated by John Myers. His own photographs were taken between 1981 and 1988, in the West Midlands, west of Birmingham, known as Black The Black Country ’. During the Industrial Revolution, it was the most developed region of England, with its coal mines, ironworks, metallurgical and brick factories. “The Black Country” was hit hard in the early 1980s by the crisis. Filing for bankruptcy, factory closures, left thousands of people unemployed.

The factories were abandoned, transformed into storage or offices, then into areas of activities, distribution, logistics and other real estate developments. It is this rapid and irreversible change that John Myers grasped with some brutality.

He then selected and edited the series of color photographs of his sidekick Peter Mitchell presented here. He chose to mix two the very different outlooks, undoubtedly diluting the brutality of their temporality, also giving them a certain distance, forty years later. To select the color images of Peter Mitchell, he scanned over 500 unpublished negatives. We rediscover Peter Mitchell’s Leeds from a different perspective, the strata of a city steeped in history, exposed to the urban changes of the 1970s and then the 1980s. From Victorian hotels to concrete tower blocks, the asphalt , the macadam, all this in the characteristic square frame and the creaky atmosphere of Peter Mitchell.