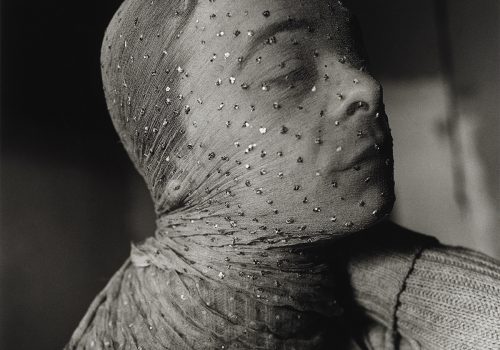 There is nothing smooth in Peter Hujar‘s work, aside from the surface of the gelatin silver prints currently on view at the Musée du Jeu de Paume in Paris.

Like Diane Arbus and Robert Mapplethorpe, between whom his body of work is often situated, his hunting ground was New York. Trained in fashion and studio photography (he was an assistant for Richard Avedon, amongst others), he began a freelance career in 1967. But his heart was really in his art. Influenced by the tight cropping of Lisette Model, he deployed his talent as a portrait photographer, capturing the fauna of the East Village underground with strength and deftness. While Arbus chose her subjects randomly and Mapplethorpe, already established, was busy chasing celebrity commissions, Hujar photographed people “who dared” : from Susan Sontag (who wrote the introduction to the only monograph published during his lifetime : “Pictures in Life and Death”, 1976), to his lover, the artist David Wojnarowicz, as well as drag queens and other marginals from his entourage. Each subject was treated with empathy and respect. Through his composition, a gaze, a gesture, the faces and bodies of his subjects expressed the indomitable intensity of existence. His gallerist Marcuse Pfeifer notes that Hujar used the “mode of the reclining figure, something rarely found in photography and yet standard fare for painting and sculpture from all periods.” He continues to explain that Hujar’s subjects are “in total repose and yet not totally unselfconscious” and that they are “revealing their vulnerability and fragility.”(1) It is this feeling of proximity and complicity which gives Hujar’s portraits their strength. Far from the anonymity of Arbus or the formal artifice of Mapplethorpe, Hujar seeks (and finds) a truth which brings his subjects closer to the viewer. Hujar’s mastery of light often reminds one of cinema (the artist aspired to be a director in the 1960s).  His landscapes and portraits of farm animals also demonstrate  research in composition and emotional proximity to the subject.

Solitary, self-demanding, not knowing how to “sell himself”, the artist was slow to emerge and have his work exhibited. Upon his death in 1987 (from AIDS related causes), there exists only one book and one catalog bearing his name.

In an interview Hujar said : “I think of my photographs as pieces of paper that have a life of their own. The whole story has to be on that paper. It is amazing that photographs could have that much power.”(2) The power these photographs still possess today testifies to Peter Hujar’s uncompromising talent and his ability to bring out what is most human : the expressed desire to live, with the knowledge that death awaits us all.

A catalogue, with an introduction by Joel Smith, is published in connection with the exhibit.