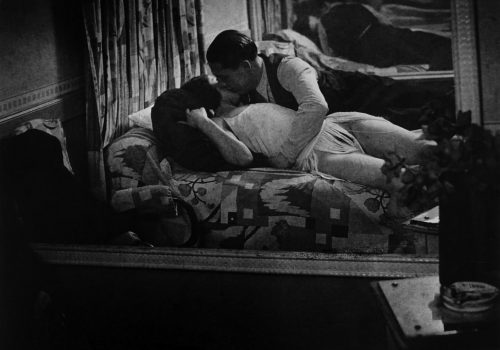 This is the ninth installment of the online series by Peter Fetterman Gallery called the Power of Photography highlighting hope, peace and love in the world. We invite you to enjoy and reflect on these works during this time.

Brassaï moved to Paris in 1924 and never left. He and that city just connected on a profound level and he made it his own even though he was technically an “outsider.”
His objectivity and intelligence captured the nuances of the city from its streets to its cafes, its parks and monuments by day and night, and also its hidden secrets that no one had ever truly captured in such an insightful way before. More than anything, he understood human nature and the human psyche without judgement.
This is one of the great images from his celebrated book, “The Secret Paris of the 30’s” and this print was formerly in the collection of one of the greatest 20th Century art dealers, Ileana Sonnabend, so we know the physical print is special.

Louis, in his 93 years, lived life to the fullest right until the end. He was for sure a Brooklyn boy, a true original character. To be in his presence was always amusing, engaging and insightful. This is one of my favorite images of his. I just devour newspapers and magazines but fear they will soon be a thing of the past, especially newsstands. So many of them have closed here in the last year.
I just love the optimism emanating from this image. You know this young woman is going to have a great day. She is so focused and determined. Whether she is going on an audition or job interview, she is going to nail it for sure.

I grew up loving and listening to all kinds of music from Bach to Puccini to Reggae to Jazz. I have always been energized by it and sometimes a single piece of music can encapsulate an era in which you lived. I certainly never lived in New York during the 1960’s and 1970’s as I was growing up in London, but through Lou Reed I can certainly imagine what it might have been like.
Likewise a single image can evoke the same feeling. I was offered this print signed by both the photographer and the subject and had to have it to help me understand that era. One must never stop learning about things you know nothing about and this image helped me undertake that process.

Today is a special day. This is our 100th “Power of Photography” daily image. I cannot believe this number. How did this happen? This started out as a little self therapy over 100 days ago helping me get through the extraordinary times we are living in. Revisiting these images I had feverishly collected over 41 years brought back such great memories of how they had been acquired and the circumstances and the people involved. I thought I would do just a few and to my surprise the series developed its own momentum. Clients and friends forwarded them on to their families and friends and each day my colleagues Mike and David and I received heartfelt messages from all over the world from strangers telling us how these images have helped them navigate these surreal times and that they have given them hope for a brighter future which has been truly humbling.

I thought it would be appropriate today to feature the first photograph I ever bought all those years ago when I first arrived in California in 1979 to pursue my film making aspirations from London. Of course the image had a special autobiographical resonance for me as I had grown up obsessed with World Cinema. I struggled to find the $400 to pay for it and if I were sane I would have spent the money putting new brakes on the beat up Ford Pinto I was driving. But I guess fate had another career in mind for me and this single image you could say changed the direction of my life. I subsequently got to meet Max Yavno who was equally inspiring. Thank you Max.

I will try my best to continue this series and hope to present to you equally beautiful and soulful images. I appreciate all your support and encouraging words. Here’s to the next 100 days together. Be well, be safe.

This is one of the great images of history. It tells us so much of the human injustice of apartheid in a single frame.
It has always moved me since the first time I saw it. I suggested to Jürgen that we should produce a special platinum print of it as I felt the process would bring out even more details of the human drama of the moment..
I find it tender and heartbreaking at the same time. It captures the soul of this special man whose words resonate with even more relevance today.
“Education is the most powerful weapon which you can use to change the world.”
~ Nelson Mandela (1918-2013)

I grew up loving the Marx Brothers’ movies and whenever I need a pick-me-up I watch, “A Night at the Opera,” perhaps the funniest film ever made. As you dear friends can imagine we have all needed a lot of pick-me-ups recently…
To my amazement a few years ago I came across this rare portrait of them by none other than one of my favorite portrait photographers, Yousuf Karsh. These genius comedians must have given Karsh, best known for his more serious studies of all the great statesmen, dignitaries and artists of the 20th Century, one of his most special sittings. Oh to have been a fly on the wall at this one.

Flor is one of my oldest photography friends. We were her first gallery and our careers have paralleled each other. Whenever we are together memories flood back for both of us. We laugh and sometimes cry and reminisce. And reflect on the passage of time and all we have been through, together and apart.
Her great photographs are timeless and heartbreaking. None more so than this image, one of my favorites of hers. The subject is an itinerant Bolivian musician who travels through the country, playing at weddings and funerals and village events accompanied by all his worldly possessions. It has one on the most beautiful titles I have ever encountered.

When you are in Paul’s presence you know you are in the presence of a special human being who exudes wisdom and insight. He is articulate and profound, but never pretentious. I see him as a kind of shaman, an elder who is a spiritual guide who has taught me much over all these years without ever pretending to be a teacher. I think his images work on a special plain of enlightenment.
This is one of his great photographs. How can something so simple radiate so much power and beauty?
As he tells the story, “A sunflower came as a gift from a friend and quietly took it’s place on my windowsill. It seemed content, as nature’s marvels usually are, with whatever notice it might receive. But as I passed it several times a day and glanced each time toward its radiance, the flower began to grow less shy. It seemed to ask, if not demand, that I draw nearer and record its moods on film. Finally I gave in and took the first step toward another world. As I dwelt upon the beauty of the sunflower, on its golden crown and everchanging form, it began to whisper of a realm beyond the sensual mind, a realm magnificent and strange.”

I love train stations and would much prefer to travel on them than any other form of transportation.
They are great places also to view hellos and goodbyes.
Here a mother is seeing her child off for safe evacuation to the English countryside from the perils of wartime London.
So heart-breaking, but hopeful at the same time for a better future.

John G. Bullock was a widely exhibited Pictorialist photographer in all leading salons at the turn of the century. He caught the eye of Alfred Steiglitz who included him in the Photo Secession’s inaugural exhibition of 1902 at National Arts Club in New York. His work is included in J. Paul Getty Museum, Metropolitan Museum and the Smithsonian Museu.
This print is incredibly atmospheric and tender and inspiring. I have always thought of it like a great Mary Cassatt painting. The light streaming on her white dress and her focus. If it had been shot indoors it just wouldn’t have the same beautiful atmosphere and power.