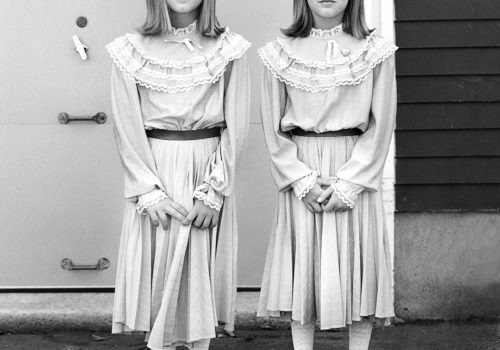 The notion of identity and exploring our other ‘selves’ is a subject that has influenced the work of Canadian photographer and digital media artist Pierre Dalpé for more than 20 years.

Initially Dalpé used photography to explore his own ideas around identity. During his university years he was drawn to the drag scene in Montreal as he explains. “At that time I was going out to clubs and many of my friends were doing drag. I was experimenting with that too, and I thought it would be interesting to create portraits around that theme”.

Early sitters were friends and the trust between close acquaintances allowed Dalpé to creatively roam. He took portraits in his friends’ homes creating an intimacy that suffuses this visual commentary. Stylistically there are references to both observational documentary aesthetics, as well as classic portraiture, with images presented in diptych portraits that show the person in everyday clothes and in drag.

“After university I started reading feminist and queer theory,” he says. “This material fuelled my interest even more, so I continued to experiment with the concept. I started showing my work in small galleries and exhibiting it with quotes from the books I was reading.”

As the work evolved he began to toy with the idea of creating portraits where the dual identities appeared next to each other. “I thought it would be really interesting to show people as their different characters, interacting with themselves and playing different roles in a single image”.

It was the mid-1990s and digital manipulation was in its infancy. Dalpé taught himself Photoshop and experimented with combining analogue and digital practices to arrive at the seamless integration that underpins the works that feature in his book, ‘Personae’ published by Les Éditions Cayenne.

‘Personae’ captures a selection of Dalpé’s works starting with his first series Clothes Minded, which he shot while at university. Interspersed throughout the book are essays in both French and English including Dayna McLeod’s ‘The Hierarchy of Photographic Truth and Dalpé’s Digital Double’. This essay discusses the use of digital manipulation in art and how when flawlessly done, as is the case here, the audience can be initially duped. It is only after close investigation, and spending time with each image, that the story within begins to emerge.

In the chapter Personae I Dalpé introduces us to Mr. Michaels and the Kim Sisters, a tripling that allows Mr. Michaels to present not two, but three sides to his personality. Jeffrey and Ultra follow in a sexy, edgy, theatrical doubling. Flip the page, and suddenly there is a portrait of two young girls, twins, posing in front of a suburban garage. This begins the interspersion of a theme whose power lies in the seemingly ‘normal’ visage of identical siblings and the discovery that they are actually the same person exposing their inner thoughts about their own identity.

“When I show this work I often get comments about my portraits of twins,” he laughs. “Because the images are less theatrical and aren’t gender bending people often find them unsettling because it looks like a found image.”

He tells that he named this portrait the Nemerov Twins in homage to Diane Arbus one of his main influences. “I really relate to her work on a lot of different levels and particularly the idea that she was photographing people in their environment. I’ve always been interested in that documentary, photojournalistic style.”

Dalpé says the pairing on non-transgender works is also a comment on the notion that everyone has different personalities. “The idea that we all potentially embody different personalities, and have the potential to express these sides…it is quotidien…our everyday dress is a form of drag because we get up in the morning and decide what we are going to wear depending on what we have to do for the day and how we feel. If I get up and put on a suit and a tie that is going to make me act and feel in a certain way as opposed to if I put on a dress. Obviously.” He laughs again and continues. “I like the idea that we as people, it’s almost like we are blank canvases and we can create the way we want to feel and act and appear”.

As his body of work has grown it has become “a great calling card” allowing Dalpé to expand his reach and approach strangers to pose for him. Often Dalpé has a particular aesthetic in mind. He researches, collects clippings and looks at various images for inspiration. He scouts locations and directs his subjects as if on a movie set. Dalpé also uses props such as mirrors, which in certain portraits may reflect only one person’s image, adding to the conversation around what is real and imagined. But each person names their alter ego and explains to Dalpé what that person’s character is like.

“My work explores the interconnected relationship between body, identity, disguise and performance,” says Dalpé who is keen to continue to expand this theme, and to also work more with moving image. “Still photography is a medium I want to continue to work with, but I also want to create video portraits of people that will incorporate images I’ve taken in various environments”.

“It is about experimentation at the moment. I would like to have people talk from the points of view of their different characters and have them describe how they make each other feel, what their relationship is…I’m also thinking about making a documentary film that explores what inspires people to start expressing the different characters within. Working with video opens a new world and that excites me.”