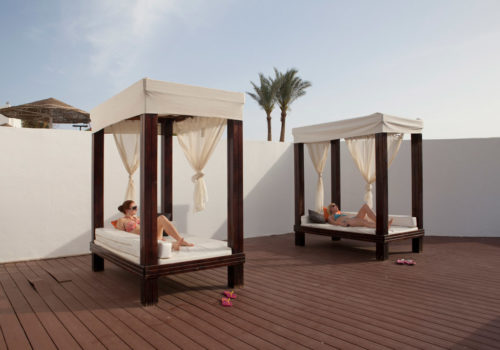 The Sinai region suffered directly from the effects of the Arab Spring and more specifically from the recent events that took place in Egypt. On the coast of the Red Sea, “Tahrir” is synonymous with “catastrophe”. Egypt has largely bet on the tourist industry (around 15% of the GDP), and for the Sinai region it is nearly all of the economy that is based on tourism. A risky bet, since as soon as political tensions occur, it is the entire region that is deeply affected. The terrorist attacks of 2000, the Intifada in nearby Palestine, the 2011 revolution, and more recently the emergence in North Sinai of ISIS affiliated groups have been undermining the coming of Western tourists on whom the entire region’s economy depends.

Only in the city of Sharm el Sheikh – a fake and highly secured decorum – the business has distinctly restarted, with tourist operators relying on the Russian market with « packages of all-inclusive discount trips ». Hotel owners pride themselves on the recovery of bookings since the election of General Sissi, and boast a government that shows off its many militaries assets as a proof of control. In the rest of South Sinai, carcasses of empty hotels, left abandoned or never completed, cover the entire cost, from Taba to Sharm el Sheikh. According to the Egyptian Information Service, 86% of Sinai’s real estate is allocated to the tourism industry. The Bedouin, a nomadic population indigenous to the Sinai region, endure a very strict policy of military control and are broadly excluded from the tourism businesses.

On this piece of land, a strategic passage point between Africa and Asia, the development of the tourist industry conducted by investors from Cairo or from the Gulf, has completely transformed the region: the architecture, artificial and naïve, reveals the progressive disconnection with cultural local reality. The facilities are conforming to global standards in order to satisfy the client’s expectations. The ambition of investors far from being realistic, results in oversized constructions, devastating the environment. The security requirements lead to an extreme closuring of the land. The Sinai has become a “non place” (following the term used by French Ethnologist Marc Augé) where each one – the tourist, the Bedouin, the soldier or the seasonal worker – is confined to t spaces according to the role  they are allocated.

This work was inspired by the essay “The ParK”, Bruce Bégout

Magda and Andrea are a duo of photographers from France and Italy. They live and work in the Middle East since 2008. Their work focuses on the effects of globalization on society, economy and territory in the Middle East. Their first project, “Palestinian Dream” pictures the transformations of Palestine modeled by an ideal of modernity, and the illusions of an economical development under occupation. In “Sinai Park”, they explore the consequences of mass tourism on the territory of Sinai, Egypt. Their work has been published in magazines internationally (Newsweek Japan, Courrier International, Sunday Times Spectrum magazine, Internazionale, Marie-Claire Italy…) They were recently acknowledged with the 1rst prize Foiano Festival of photography in 2014, and with the Tabò award in 2015. Palestinian Dream was exhibited in le Mois de la Photo in Paris, 2014 , and Sinai Park will be exhibited in Paris in November 2015 at the Maison Européenne de la Photographie.