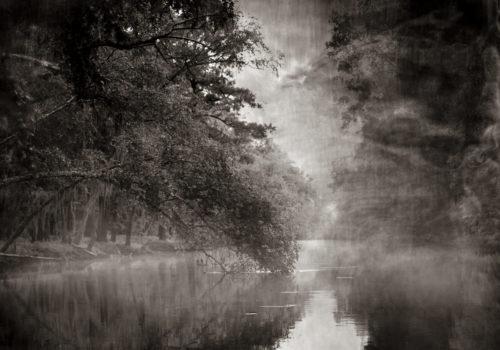 Throughout Keith Carter‘s extensive career, he has always had a keen eye on the landscapes, swamps, marshes and bayous along the Texas and Louisiana border. Soon, a survey of these mystical lands will be presented in the monograph, Ghostlight , published by University of Texas Press due to be release early 2023.

In conjunction with Carter’s latest publication, PDNB Gallery, exhibits these new works at the gallery.

Keith Carter’s haunting, enigmatic photographs have been shown in over one hundred solo exhibitions in thirteen countries. Thirteen books of his work have been published along with two documentary films: A Certain Alchemy, and Keith Carter: The Artist Series. Called a “Poet of the Ordinary” by the Los Angeles Times, he is the recipient of the Texas Medal of Arts.

Mr. Carter has been featured on the arts segment of nationally televised CBS Sunday Morning, and is the recipient of the Lange-Taylor Prize from the Center For Documentary Studies at Duke University. His work is included in numerous private and public collections including the Art Institute of Chicago, The National Portrait Gallery, The Smithsonian American Art Museum, The San Francisco Museum of Modern Art, The J. Paul Getty Museum, The Museum of Fine Arts, Houston, The George Eastman House, and The Wittliff Collections at Texas State University.

A gifted and insightful teacher, Keith Carter holds the Endowed Walles Chair of Art at Lamar University in Texas where he was awarded the University’s highest teaching honors; the Regents’ Professor Award and Distinguished Faculty Lecturer Prize.

About the book:
Southern wetlands, with their moss-draped trees and dark water obscuring mysteries below, are eerily beautiful places, home to ghost stories and haunting, ethereal light. The newest collection from award-winning photographer Keith Carter, Ghostlight captures the otherwordly spirits of swamps, marshes, bogs, baygalls, bayous, and fens in more than a hundred photographs.

From Ossabaw Island, Georgia, to his home ground of East Texas, Carter seeks “the secretive and mysterious” of this often-overlooked landscape: wisps of fog drifting between tree branches; faceless figures contemplating a bog; owls staring directly at the camera lens; infinite paths leading to unknown parts. Similarly, spectral images are evoked in the original short story that opens this book. Ghostlight, writes best-selling author Bret Anthony Johnston, “hovers, darts, disappears. It can be as mean as a cottonmouth, as mischievous aes a child. The closer you get, the farther the light recedes.” A masterpiece of “Bayou Gothic,” Ghostlight challenges our perceptions and invites us to experience the beauty of this elusive world.