Patrick Chauvel: –The war is here 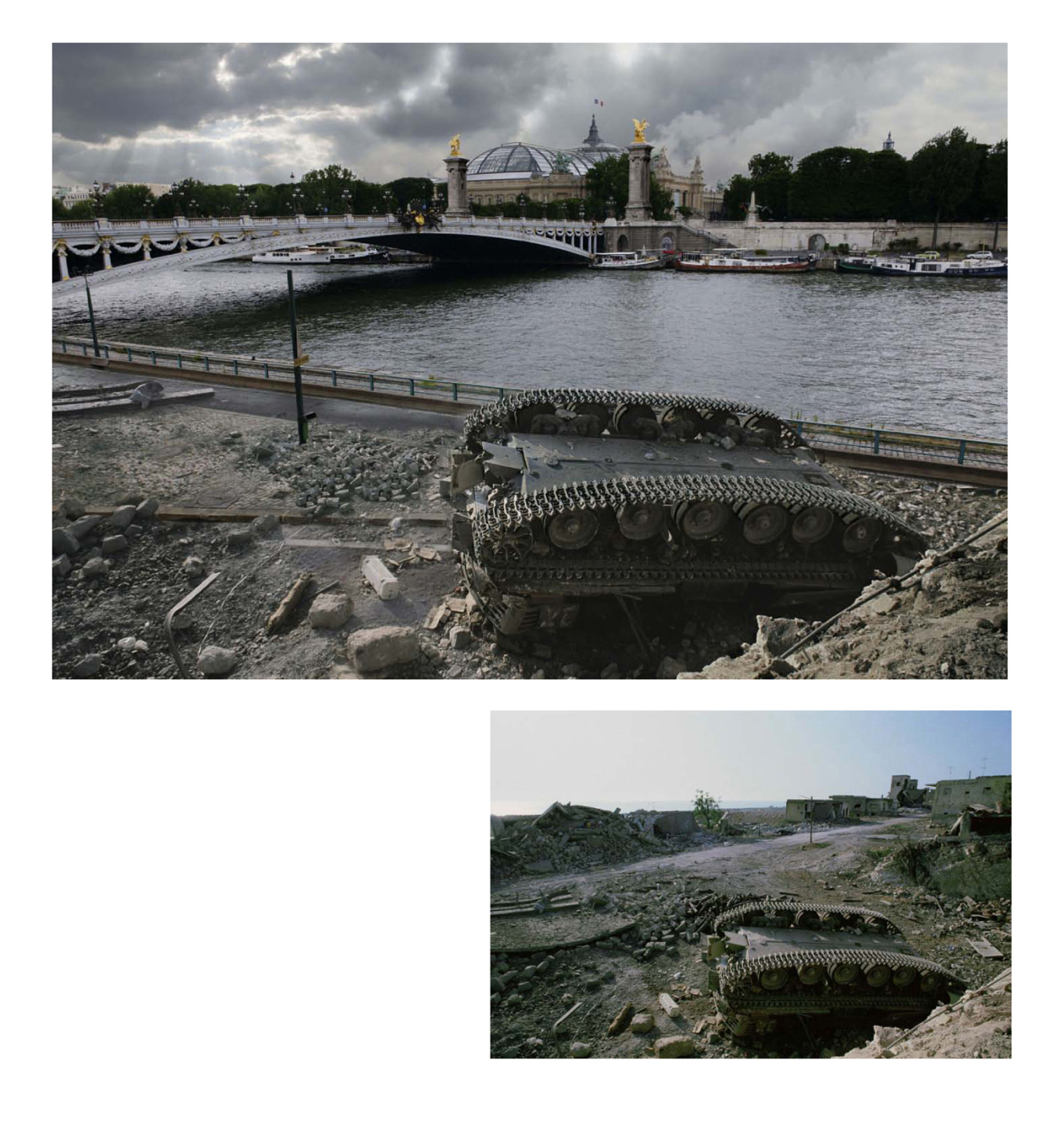 Patrick Chauvel never ceases to surprise. For the past forty years he has covered the majority of the world’s major conflicts. He defines himself as a war reproacher. He loves to provoke and has now transformed Paris into a war zone, superimposing true images of war onto Paris today. His long life friend, Claudine Vernier Palliez, a senior reporter at Paris Match, tells us about him.

All war photographers agree : “Chauvel, he’s the boss”. But for him, even when his pictures are on target, and seen around the world, he argues that those taken by his peers were certainly better, that his were only slightly good, and only because he haphazardly happened to be in the right place at the right time, as if a person can haphazardly happen upon devoting one’s life to defying ignorance, everywhere, always, and in every way. Despite forty years of covering the world’s conflicts and the very serious injuries that would have rebuffed more than one photographer, he continues to return, for if he doesn’t, it is far worse, as if without a witness, the crime didn’t exist. Patrick Chauvel is our friend, but without a doubt, if he heard how we were praising him, he would knock us right out with a right hand swing, because he is also the most humble of us all, and modesty is the sign of a master. Yes Patrick, sorry if it offends you, but you are our master, the one who opened our eyes to this responsibility that we weren’t necessarily conscious of, the essence of our profession.

Chauvel’s pictures have been printed in the world’s most prestigious newspapers, but his first double page spread in Paris Match was a pure accident. Like we know accidents don’t happen, rather, it is the result of a superior math problem. He was five and was wearing a delightful little coat with a velvet collar. His grandfather, Jean Chauvel, an Ambassador in Geneva, later promoted to Ambassador in France, was negotiating that day the agreements of the same name that would put an end to the war in Indochina. The photographers who were rushing to capture this historic moment had nothing better to shoot than this seemingly docile little boy, an appearance that would definitively leave him when his father, Jean-François Chauvel, a senior reporter at the Figaro newspaper, decided that he would make a man out of his little boy and sent him to study in a military academy where his days began with the raising of the flag. He wouldn’t finish his studies. Undoubtedly this rage, this “desire to pick a fight” comes from his years at this school, where corporal punishment was freely administered for no reason. And for the Chauvels, indomitable Bretons, resistance is transmitted from generation to generation, and for his mother, more Corsican than the Corsicans, it is the same. Pierre Schoendoerffer is a parent, Kessel and Henry de Monfried close friends. Patrick marveled at their conversations and dreamt of becoming one of them. For four generations of journalists, and apparently those to come, Chauvel will be the “craziest photographer on the planet”, ready to take any risk, incapable of resisting the call to fight a cause. He should have died a thousand times and been left dead in Panama where a military preacher was preparing to deliver his final rites. When asked what his religious was, he replied “I am a photographer”, which, for Chauvel, was a professional oath. Patrick doesn’t only work for the press, but for memory. He tells the stories of History, those that disturb, that we prefer to ignore, those of the unheard. Although he admires James Nachtwey, Brassaï, Luc Delahaye and Gilles Peress, Chauvel doesn’t seek to make pretty pictures. Sometimes, he doesn’t frame the image, adds an unlikely element that looks wrong. “It is important for the spectator to think “I could have taken the same picture if I was there”. It is always the poor who are on the frontlines, the pictures must be poor. Truth is dangerous, useful.”

To demonstrate that war doesn’t only happen to others, it can also happen at home, there could be the same violence, the same suffering and the same frontlines, Chauvel created “War Here”, exhibited first in Bayeux at the annual war correspondents’ festival. Two years before September 11, he envisioned an intifada at the foot of the Twin Towers, tanks and deadly battles in Madrid and London, never imagining that these capital cities would all be terrorist targets. He is a bit of a visionary, with the lucidity that comes from experience. When he talks about himself, he is never serious, and always brings us to tears with laughter. Boris Vian said that humor was the manner of hopelessness, and he wasn’t wrong. When he talks about others, the photographers he loves, and it is mutual, Noël Quidu, Jérôme Sessini, Jérôme Delay, it is with tenderness, generosity, and passion.

Once again Patrick, excuse me, and excuse all those who think like me. Despite your fast punch, your pointy cowboy boots our calves hope to avoid, you are good, profoundly good. Just like Schoendoerffer said about you when he quoted the last verse of a poem he learned from a Vietnamese friend “suffering in silence plants the seeds of goodness”.
Claudine Vernier Palliez