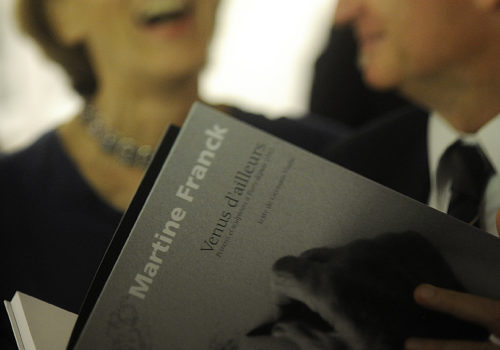 Another innovation by Paris Photo this year is the Paris Photo Platform, an experimental workshop and discussion forum on issues in photography. Under the leadership of art critic, exhibition and event curator and consultant Chantal Pontbriand, this year’s Platform takes as its theme the concept of “Mutations”.

During the fair itself, “The Live Platform” will offer a series of interviews with prominent figures as well as round-table discussions and performances, related to the field of photography. In echo to this, “The Book Platform”, in the form a publication to be released in French and in English, will be co-published by Paris Photo and Steidl.
In partnership with the LUMA Foundation, Paris Photo Platform 2011 seeks to adopt a kaleidoscopic perspective on issues raised by photography today, focusing on four key aspects: Geography / Technology / Media & Society / The body. Discussions will examine these aspects from a variety of viewpoints: political and social issues, the sciences, art and aesthetics. The accompanying publication, including texts by some sixty contributors around the world, is destined to become a leading reference work for these concerns. Perspectives of artists, collectors, museum curators as well as art critics and theorists will be convened.
The list of Platform participants and contributors includes the following prominent figures: Simon Baker, Sabeth Buchmann, Victor Burgin, Clément Chéroux, Jean François Chevrier, Tim Etchells, Christine Frisinghelli, Boris Groys, Hans-Ulrich Obrist, Caoimhin Mac Giolla Leith, Cuauhtémoc Medina, Susan Meiselas, Rabih Mroué, Martin Parr, Christopher Philips, Jean-Pierre Rehm, Adrian Rifkin, Saskia Sassen, Sam Stourdzé, Georg Schölhammer, Artur Walther, Brian Wallis, Sarah Wilson.
Each day of Paris Photo 2011 will be dedicated to one of the aspects addressed under the theme “Mutations” and will be structured into a series of micro-events: to begin with, an interview with a leading personality, followed by round tables and performances.
These key aspects will serve as springboards to explore various topics of interest today: the boomerang effect of artistic
production in emerging regions on artists in the West, countries and regions in conflict, photography as a mutating medium and its imaginary potential, tensions engendered by machines and the digital era, the impact of social networks and the Internet, the idea of community and the power of images, and the intersection of bodies, geopolitical shifts and art.
The sociologist Saskia Sassen, noted for her analyses of globalisation, and the photography theorist Jean-François Chevrier
will be among the special invited guests for an exceptional encounter held each day at 12.30 p.m.: “Under the Surface”.
In addition, for the first time this year, Paris Photo will be hosting a series of live performances. Ideas are conveyed through words, but also by way of bodies, images and sound.