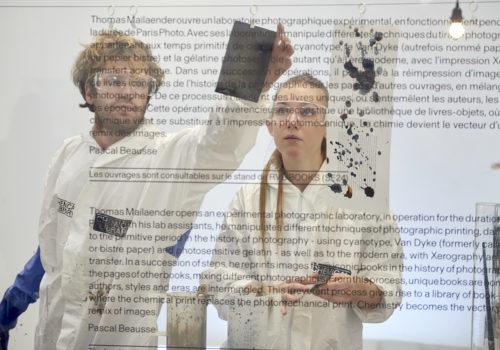 With 34 publishers, 400 signatures, a performance, a series of conversations around the photographic book and the tenth anniversary of the Prix du Livre Paris Photo – Aperture, the publishing sector continues its upward trajectory.

Shunned for a long time by institutions and fairs, the book has acquired a central place in the photographic world over the last decade, as Géraldine Lay, editor at Actes Sud, remarks: “we now systematically have sections dedicated to edition on fairs devoted to photography. A few years ago this would not have been possible. This is the sign of a fairly promising dynamism. »

Paris Photo is no exception to this growing influence of the book. This year, 34 publishers from nine countries were invited to present their creations. Among them, four newcomers including Datz Press, a South Korean house publishing poetic and beautifully crafted books or France PhotoBook which highlighted the eclectic selections of four publishers: Contrejour, Light Motiv, Loco and Éditions de Juillet.

As for the publishers already present at previous editions, note the very fine selection of the British Stanley/Barker with the works of Joan Albert, Dave Heath, Thomas Boivin, Jack Lueders-Booth and Mimi Plumb. Also across the Channel, Mack Books presented, among others, the latest books by Talia Chetrit and Alessandra Sanguinetti.

In France, Marseille seems to be the new Eldorado of independent publishing. Le Bec en l’Air, André Frère, Loose Joints and Chose Commune: all displayed admirably thought-out works, whether Broken Specter (Loose Joints), Richard Mosse’s magnetic series on the collapse of the Amazonian forest or Meeting Sofie by Snezhana von Büdingen-Dyba (Le Bec en l’air), a tender and bucolic hymn to an adolescence lived under the sign of difference.

The Lithuanians Kaunas, for their part, made a necessary reference to current events, paying homage to Ukraine through a selection of heterogeneous books, the most classic, with in particular Teoura, a monograph on the photographs of the 1930s by Sophie Jablonska, to more singular productions, such as Kirill Golovchenko’s comical Out of the Blue. The country was also honored in the selection of the Book Prize, since six books on Ukraine received a special mention from the jury.

Co-organized by the Aperture Foundation and Paris Photo, the Prix du Livre celebrated its tenth year with this edition. And while some waited in line to access Ruinart’s VIP Lounge, others stampeded their feet waiting for the announcement of the winners: the First Book prize was awarded to Sabiha Çimen for Hafiz (Red Hook Editions), her sensitive project on Koranic schools in Turkey.

The Book of the Year went to the famous Périphérique series by Mohamed Bourouissa (Loose Joints) while the Catalog of the Year Award went to Devour the Land: War and American Landscape Photography since 1970 by Makeda Best (Harvard Art Museums ), an exploration of photographic responses to military impact on American lands. A special mention also greeted the splendid work of Tokuko Ushioda, My Husband (torch press).

Faced with this whirlwind of pages and images, the suspended moments offered by the performance Chemical Library by Thomas Mailaender, the meeting with the photographers around the signatures or the conversations organized by The Eyes were salutary. Three afternoons were devoted to these fascinating discussions during which a photographer talked about his work through one of his editorial projects.

With a varied and high-quality selection, showcasing established houses as well as younger ones, Paris Photo’s publishing sector reflects the ever-growing interest in books, and almost steals the show from the rest of the fair…