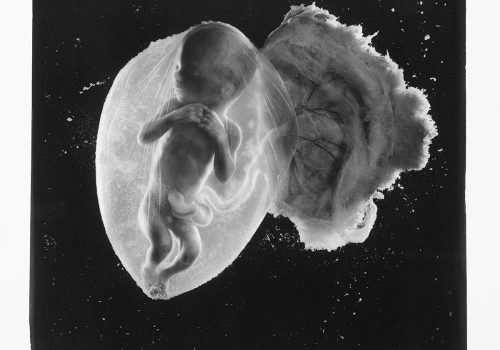 Lennart Nilsson stunned the world in 1965 with the first photographs of pre-natal life. Half a century ago the planet was so different; even though human ingenuity with the atom meant that we had to come to terms with the possibility of self-destruction, there was optimism that science could save us. Although the political landscape was clouded, we were hopeful that a new generation would cross the political barriers. We could recognize our common humanity, regardless of manmade boundaries. We were the inheritors of the ‘family of man’. Lennart’s pictures remind us we are born from a common process, we all embody the outcome of the same interior encounter and we all share the same emotions that drive us to seek or offer the protection of the parent. His photographs would not have astonished us were they simply data — cold as laboratory information. The pictures operate at another level of human signal and response. The unborn child in the last stages of the pregnancy, its human features fully recognizable, is as beautifully photographed by Lennart as the sacred newborn was once painted by Renaissance masters in the arms of the Madonna. The photographs can touch a deep emotion — a universal emotion.

Four years after the first publication of the photographs, men landed on the Moon. The overriding experience of those who made the epic journey was that they saw the Earth in a new way. They had literally stepped not just on to lunar dust but outside of their usual selves. The most popular photograph from the thousands they made is the picture of the Earthrise. In that image we see our place of origin in the context of cosmic space. You can marvel at the power of Lennart’s photographs produced in a century, the history of which was measured by photography. You can wonder at what was revealed by the lens, but, in fact, you face a reflection of yourself. When NASA followed the Apollo lunar enterprise with the Voyager missions that probed deeper into space, they took on board images by Lennart. The photographs provided tokens that stated ‘this is us’.

Lennart was a storyteller. His background as a photojournalist accounted for his sense of narrative. He was a populist who made invisible worlds accessible for those outside the realm of science. This story of a sperm and an egg — of the junction between male and female — is unsurpassable. Its conclusion is a new life.

Since Lennart’s pioneering accomplishments, no later photographs have possessed the same qualities. Techniques have advanced. The scanned imagery of the human embryo is getting sharper. Colour can be digitally imposed. We have entered the age of three-dimensional imagery that exists on a computer screen. But Lennart’s work has a unique ingredient: it is accessible to the mother and the child alike. This work is clearly of a particular time, but like great art the pictures resonate beyond their time. They have their own pulse, one of profound discovery, for, of course, Lennart is more than a photojournalist, and this is much more than a simple story.
Mark Holborn