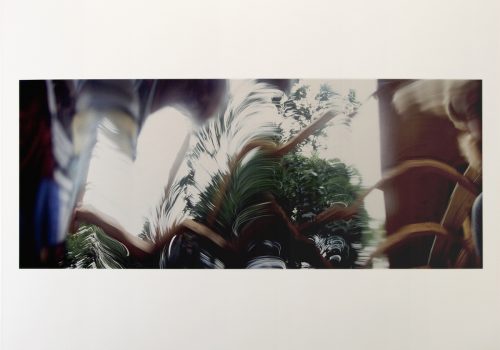 The Karsten Greve Gallery presents Photographs, an exhibition devoted to the photographic work of John Chamberlain, a major artist of 20th century American art who, with his metallic works, realized through a mechanical crushing process, has revolutionized contemporary art.

Known since the 1960s for his sculptures from compressed car bodies, which he began to make in 1958, John Chamberlain is one of the key figures in contemporary art, halfway between the gestural energy of Expressionism Abstract and the consumerist euphoria of Pop Art. With his works, resulting from a work of compression, cutting, coloring and editing of different pieces, John Chamberlain has upset the world of contemporary sculpture: he gives the materials of everyday life an artistic status, in an aesthetic perspective close to ready-made dadaist. Chamberlain uses the debris of the auto industry, protagonist of much of the industrial history of the United States and especially its bankruptcy, as well as foreign tools to the world of plastic arts to create an erotic beauty, vibrant colors .

Although his sculptures have contributed greatly to his fame, Chamberlain has experimented throughout his career a wide variety of media: painting, drawing, monotypes, cinema and more particularly photography. It was thanks to the Widelux camera offered by Larry Bell that from 1977 Chamberlain began experimenting with the photographic medium. His photographs are exhibited for the first time in 1979 in New York; as well as his sculptural work, the Karsten Greve Gallery has been exhibiting them since the 1980s.

The camera allows Chamberlain to create photographs following the same principles that guide his plastic work: they are the result of a transformation that the artist operates on a pre-existing material according to his subjectivity and the principle of collage. The Widelux is indeed a panoramic camera, which composes a great view from smaller images put side by side. Equipped with a moving lens that allows you to shoot at angles from 150 to 360 degrees without distortion, it is traditionally used for landscape documentation. Used in a traditional way, fixed on a tripod, the Widelux produces images whose composition is clear and balanced. But this usual use is upset by Chamberlain when he decides to rotate and rock the device during the exposure time. The resulting photographs are the fruit of an improvisation that is both mastered and intuitive, anchored on the idea of ​​a movement that deforms and melts objects into a flow of color. Chamberlain’s interest in the movement has often been similar to the research done by futuristic artists, particularly the photographic work of Anton Giulio Bragaglia and the works of Umberto Boccioni. Nevertheless, in his panoramic photographs the use of movement as a principle of destruction and reconstruction of forms acquires a new aesthetic dimension. The artist uses the errors produced by the tilting of the camera to extract things from their immobile material reality and project them into a dimension where time is materialized by the movement of fluid flows of colors.

The chromatic dimension, as well as the shapes and reflections of light, are indeed very important in Chamberlain’s photographic approach. The contrast between the cold colors of the artificial lights and the warm tones of the daylight is particularly accentuated. To get it he plays with dandruff, for example using a film calibrated for natural light for indoor photos, the chandeliers of bars and restaurants surround themselves with a luminous halo, giving photos a very hot. On the other hand, in the Studio Lite series (1989) he works with a calibrated film for the artificial light which, used on the neons of his studio, makes them appear in an extremely pure white, in a form of wave, supporting the movement of the camera.

John Chamberlain was born in Rochester, Indiana, United States, in 1927. As part of his studies at Black Mountain College, he had been interested in abstract expressionism and had privileged objects of his artistic experiences, until that day in 1957 when crushed pieces of a discarded Ford appeared to him as the ideal material to give substance to his ideas. Since the early 1960s, his work has been accepted in many major collections, including the MoMA in New York, the Pompidou Center in Paris and the Tate Gallery in London. John Chamberlain participated in the 1961 Biennale of São Paolo and the Venice Biennale in 1964. The Guggenheim Museum in New York and the Museum of Contemporary Art in Los Angeles devoted retrospective reviews in 1971 and 1986 respectively. , preludes to important exhibitions at the Kunsthalle Baden-Baden (1991) and the Stedelijk Museum in Amsterdam (1996). The Karsten Greve Gallery has been exhibiting his work since 1989. John Chamberlain died in 2011 in New York.