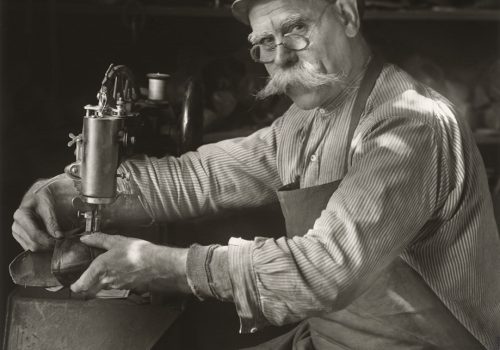 Hauser & Wirth  presents its inaugural project at Paris Photo 2019 with a solo display of rare lifetime prints by the late German photographer August Sander: a forefather of conceptual art and pioneering documentarian of human diversity. The considered selection features 13 photographs taken between 1911 and 1941 from Sander’s celebrated series ‘Menschen des 20. Jahrhunderts (People of the 20th Century)’ and come directly from the August Sander Family Collection.

The exhibited portraits from this series at Paris Photo give insight into Germany’s complex socio-economic landscape in the years leading up to and through Nazi Germany and serve as an important landmark in the history of art and photography through the artist’s unique portrayal of his subjects. Sander considered empathy toward his sitters to be critical to his work and strove not to impose characterisation upon an unwilling subject, but instead to enable ‘self-portraits’. As Sander explained: ‘To see the truth, we have to be able to tolerate it; but above all, we should pass it on to our fellow human beings and to posterity, whether it is convenient or inconvenient for us’.

Over the course of a career spanning six decades and tens of thousands of negatives, August Sander created a nuanced sociological portrait of Germany comprising images of its populace. Sander’s lifelong effort to catalogue contemporary German society through his photographs and to reveal the truth of its ethnic and class diversity is encapsulated in his body of work ‘People of the 20th Century’. Working in a rigorous fashion, Sander pioneered a precise, unembellished photographic aesthetic that was formative to the establishment of the medium’s independence from painting and presaged conceptual art: after experimenting in darkrooms, Sander discovered that by enlarging a photograph using smooth, glossy paper typically reserved for technical images, he was able to create a portrait that was extraordinarily detailed.

In his early images, the artist photographed the farmers of his native village Westerwald – people with whom he had a rapport – and proceeded to sort them ‘according to their essential archetype, with all the characteristics of mankind in general’. From these photographs Sander produced the iconic 12-photo ‘Portfolio of Archetypes’, a grouping that would set the tone for his larger project ‘People of the 20th Century’ in both organisation and concept. Expanding this conceptual framework, Sander went on to document individuals across the many strata of German society in strikingly frank images with titles like ‘Bricklayer’, ‘Architect’ and ‘Chauffeur’. The individuals captured by Sander’s lens ran the gamut from farmers to industrialists, secretaries to aristocrats and also homeless and disabled people, and the sitters told their own stories through their expressions, gestures, poses, clothing and accessories. Sander presented each of his subjects as wholly individual — rendering their riveting idiosyncrasies, their unrepeatable details.