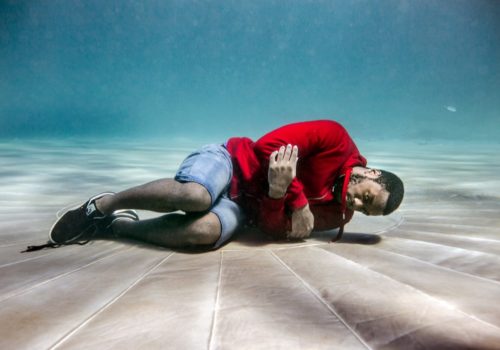 Preview
2015 a total of 770.838 refugees’ arrivals by mediterranean sea in hope of escaping war. 154.167 children, 107.917 women, 508.754 men.
In all 3,440 people have died or gone missing this year crossing the Mediterranean Sea.
If we were to give only one word to define life, only one possible picture would come to mind, breath. Breathing is the only thing for sure we know means we are alive. It is our gift to earth before we die. Our life depends on this essence.To undertake this work, underwater, I demanded that the models overcome their fears and anxieties about suffocation – of not breathing, of not being alive for some time. Just for a photograph, or for a pose, their faces would reveal what it feels like to be deprived of air, to lose life and freedom.I chose my native Greece and its Mediterranean sea bed as by far is the largest single entry point for new sea arrivals in the Mediterranean. I asked the people to trust me and to follow me seven metres underwater in a completely alien environment for human beings.By picturing them underwater as they would be dressed on dry land, I wanted to show how dependent we are on that breath. Here, like on dry land, being deprived of air would make us suffocate. And it is the look of panic and distress caused by the deprivation of what makes us alive that I wanted to see on their faces. I sometimes saw the fight for survival in their eyes. A look that says, “I promise you that I will do anything to stay alive.”Underwater I was the only one who could provide them with air. I was in charge. I was the one to rely on for hope.At time they were calm, they knew I was nearby.Hope for this air can sometimes leads us so far away from our origins. It is a desire for survival, fleeing asphyxiation and oppression.This air that we breathe, after being deprived of it, feels like liberation.But this sudden rush of air that fills our lungs will never give us true freedom.