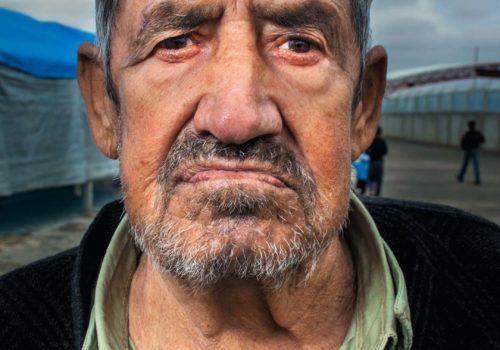 Portraits of unknown persons, looking at the lens, at the photographer behind the lens, at the viewer through their impression on paper. Faces as individual, unique and singular beings. Various sources of light, which light, by nature, is born on every human face. Light which multiplies at every meeting of faces…
I wondered, first of all, how, and if, the look of the subjects –through its diverse nuances- could make us feel milk-brothers in life, and if it could make us feel co-responsible in a society which discriminates against its own body, attacks some of its members, and eventually devours itself under inhuman ideological pretexts of biological or intellectual superiority.
So, I began to deduct data like name, origin, profession, or attributes like refugee, immigrant, alien. I wanted the face plain, the look solid, the man un-defined by qualities, hereditary or acquired.
Rather than all that, I name the place and time of the shooting, referring to my own encounter with the “Other”, within a particular time-space frame. The time and place of shooting, in terms of evaluation, were “neutral” zones.
Questions multiplied: When is a man unknown? When does a man unknown become a stranger? When does the stranger become the enemy?
Arriving at the bare look of the “Other”, I was “arrested”. I mirrored myself in him, I started to recognize myself. The more I recognized me, the more I was attracted, and the more I wondered on the “Other’s” existence. Then it was that the desire to meet him was born in me. How else, if not through the deep knowledge of his Otherness?
And when I had deducted all, I realized that attributes are an attack against that Other, burying his human face. Labels that transform the particular geographical place and historical time from a “neutral” zone to a “war” zone, swallowing names, origins and all real attributes of the face, until they swallow the man whole, so that they can build the Enemy before us.
Suggesting, today, these people’s portraits, is to remind the primary concept of Man through the look. His and ours.