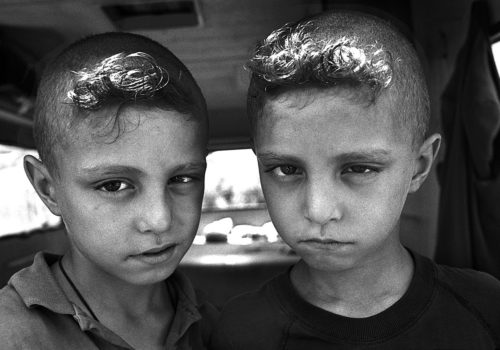 Over 200 black and white images summarize the narrative path of the Sicilian photographer, the only Italian to be part of Magnum, the famous Parisian agency founded by Henri Cartier-Bresson, Robert Capa, David Seymour and George Rodger. Included in the exposition is a section dedicated to Leonardo Sciascia, considered by Scianna to be a «father, a mentor, a teacher». Scianna, member of Pen Italia, has collaborated to the quarterly of the association since its first issue.

A son to Sciascia by Franco Marcoaldi

I think back to the hundreds, thousands of photos taken by Ferdinando Scianna in the course of his life, only partially collected in a number of books which is, by the way, now exorbitant. And I am amazed: how much did this man work? And I wonder: what irresistible inner demon has dragged him far and wide across the planet to photograph human beings, animals, parties, landscapes? What was he looking for and what did he find? Writing with light, I would say, he photographed life as a whole. Outdoors, under the sky, as well as in every possible nook and cranny. And he ended up outlining a single large “book of the eye”, a work-world made up of countless chapters, with snapshots that can also re-emerge in totally different contexts, suddenly assuming a completely new physiognomy compared to the one that was previously imprinted in our memory. This is why his work can not be considered a complete dictionary, it is not a universal encyclopedia of images: it is rather an open opera, a puzzle in perpetual progress, which theoretically may never end. As in Ovid’s metamorphosis, in fact, Scianna tells the true quintessence of life, in itself elusive, in the incessant changing of its shapes.

But it could also, proceeding by echoes and affinities, define his decades-long work as a sort of “scientific poem”, in the Canetti way, since in it abandonment to the arcane rhythm of the universal breath coexists with a spasmodic attachment to logos, to the ratio. Or rather, what remains of it: a sort of wounded enlightenment, in short; wounded, yet still fully vital. And how could it be otherwise, given that his first and unforgotten teacher was and remains Leonardo Sciascia? Yes, I look and regard Scianna’s books with enthusiasm and wonder. I casually dwell on this or that image. One more powerful than the other. One more evocative than the other. And the admiration for an amazing photographic talent, today unanimously recognized, is mixed with a subtle envy for those who, like him, can grasp the punctum of every single story, of every specific space, of every individual figure, without the need to get bogged down in the thousand illusory ambiguities of verbal language; envy for those who, trusting entirely in the eye, do not know the painful separation from reality that those who are forced to use the word are familiar with. And it still can be living in this way, the only true joy that has been given to us: that of the kairos, of the mysterious happy moment in which “I” and “world” finally come together. But here, to further complicate things, the emergence of the reverse side, long kept in the shade, but now cleared up, of Ferdinando’s personality: Scianna is also a “writer”. Yes, a full-fledged writer. Because the texts, which more and more often accompany the images of his books, are not at all simple captions, but they have a life of their own. Indeed, even better: according to the rules of a refined process that is analogical and not merely didactic, those texts bounce off the photos, giving them a further and unexpected force. Scianna’s temperamental restlessness obviously prevailed. The satisfaction for a kairos achieved by relying exclusively on the eye, and which moves to envy those who laboriously try to write verses, was obviously not enough. The punctum had to be grasped by following other paths, relying on other forms of expression too. At least I like to think so. I like to think that Scianna has been living in this real world for some time now and just “double bind”. I mean that the impulse to verbal writing, for him, is not a game, a whim. Another exercise in talent. It is now a full part of his personality as an artist. At least since the days of his formidable Visti&Scritti (Seen and written). I know this from personal experience. A few years ago, together with Ferdinando, I published, with Contrasto editions, a book of photos and poems about animals of which I am proud. In theory, I should have taken care of the texts (mine and other authors), him of the pictures (all of him). But things, God willing, turned out differently. His role in the textual sphere was a decisive result. Not only thanks to the beautiful note of him, which closes the volume.
Franco Marcoaldi