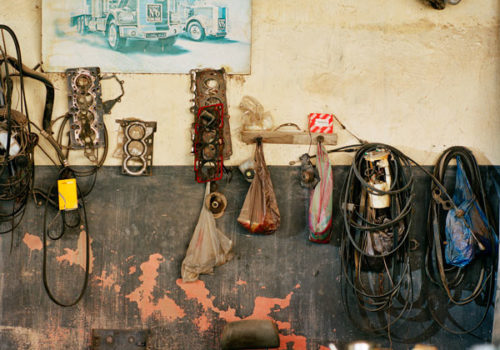 The poetic and meticulous photo series Garage Stills by Jacquie Maria Wessels (Amsterdam – NL) is exhibited at the contemporary art museum PAN in Naples (IT) from December 18, 2021 through January 13, 2022. The solo exhibition takes us on a journey through raw but painterly still lifes made in various interiors of different traditional auto repair garages around the world. We are welcomed into a reality that is slowly disappearing, as computer technology is taking over the work previously done by men. The more than 30 works in this series shown at the PAN have been made with an analogue camera.

For her project Garage Stills, Wessels is looking for old garages from all over the world, fascinated and intrigued by the shapes and colours of the mysterious objects she discovers along the way. From Cambodia to Naples to Sri Lanka, she moves and removes these objects to create a poetic still life. At first glance, the pictures contain the same elements, but at second glance the viewer notices the cultural differences, often found in small details. In the photos from Naples, Wessels focuses on details characteristic of the people of southern Italy, such as the juxtaposition of religious representations and images with an erotic background. She also gives these pictures an extra dimension with her artist’s gaze of an ‘outsider’.

What does the artist tell us by chasing images of an elusive environment which was once characterized by human presence and now replaced by technological intelligence? If the past is gradually disappearing, photography is the only way to stop it and reinvent it. Wessels analogue camera is moved by the desire to alter the gaze on objects: objects that are all repositioned, returned to a dimension of “still life”, characteristic to the Dutch and Flemish style. With a reference to the iconographic tradition of Northern Europe, the photos of Wessels tell how computer technology can become a vehicle for memory loss, forcing the gaze on another dimension that has become a dehumanized place.

What curator Marina Guida writes about Garage Stills: “The details – maybe unknown to most people – are capable of reassembling an image so strong in the mind, bringing us back to a timeless context, even if in a current and recognizable temporality. Her photographs are equated with abstract paintings, mixing real world and imagination like a happy marriage between reality and abstraction, present moment and memory, straddling the detail of the object and the universal history, abstract painting and photography, poetic vision and anthropological investigation, observation and revelation. The artist’s works appear as devices of the psychology of the mechanical society which is inexorably disappearing.”

At the same time, the stories photographed by Wessels also take on a connotation of a female gaze towards the male world. The artist approaches this strongly masculine environment without deference of a patriarchal matrix but rather appropriates it with care and lightness. Thus, the reality that photography captures takes on a different meaning from the one indicated by common sense.

Next to the Garage Stills, some works belonging to Wessels new series Fringe Nature will be on show as well as from previous photographic series such as Cityscapes. For the series Fringe Nature Wessels directs her camera towards the traces of nature in the immediate vicinity of the auto repair garages. During the Garage Stills project, Wessels gradually started to focus on the environment of the garages and the meagre bits of nature she found in these raw industrial areas on the outskirts of the city. Her painterly images are precisely composed and are as rough as they are poetic. The plants in the photographs, which in some places even slowly takes over the old garages, could also be seen as a reference to the changes in the car industry that are taking place.