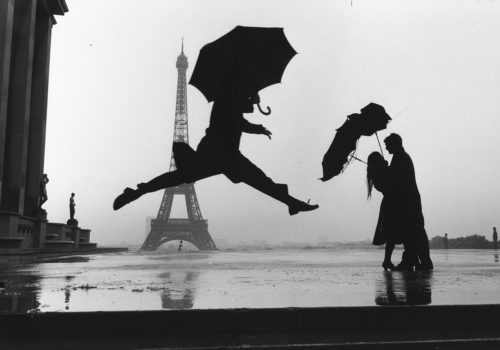 “There are two kinds of photography: Elliott Erwitt’s and everyone else’s.” – William Wegman

“I don’t take pictures of dogs. To me, dogs are people.” – Elliott Erwitt

Walk the streets of Paris with Elliott Erwitt!

Since the 1940s Magnum legend Elliott Erwitt has repeatedly returned to his city of birth and, with the eyes of a flâneur, casts his gaze on boulevards, street cafés, jardins and cabarets, always with a sense for discovering the special in the everyday.

OstLicht Gallery dedicates a new exhibition to Erwitt’s homage to the metropolis on the Seine, taking us to what is probably the most charming city in the world with 56 of his humorous and upbeat photographs.

His work is characterized by an elegant lightness and a sharp-tongued, warm-hearted humor that is unparalleled in the history of photography. Erwitt’s images seem to persistently wink at us. This characteristic view of things has shaped both Erwitt’s commissioned work and his freelance photography. It sets the tone of his photographs and thereby lends the political reportages and everyday observations in particular an emotional complexity that extends far beyond the moment that is always captured on point.

Elliott Erwitt personally selected motifs from »Paris« series for his exhibition at the Chanel Nexus Hall in Tokyo (2012), OstLicht Gallery is pleased to show the works now in Vienna.

Son of Russian emigrants, Elliott Erwitt was born in 1928 in Paris and grew up in Milan. In 1939 in the face of National Socialism his family immigrated to New York City, then moved to Los Angeles in 1941. In Hollywood 15-year-old Erwitt found his first position in a commercial photo studio, where he developed contact sheets of stars and starlets of the movie industry. In 1946 Erwitt moved back to the East Coast – New York has been his home base ever since. Here he met Robert Capa; Edward Steichen and Roy Stryker gave him his first assignments. Towards the end of the 1940s he spent a year traveling France and Italy. The earliest photographs in this exhibition were taken on this trip. Drafted into the army in 1951, he got a position as a dark room assistant in a messaging unit stationed in Germany and France. After his release from the military, Robert Capa recruited the young photographer for Magnum Photos. A member of the prestigious agency ever since, he also served as Magnum’s president for three years in the 1960s. Erwitt worked for all the big names of the Golden Age of photojournalism, among them Look, Life, Collier’s and Holiday, to name only a few. Journalistic assignments alternated with commercial work, but he always took the time for his more personal photographs – his »snap shots« as he likes to call them. During the 1970s he increasingly turned to the moving image and produced several documentaries as well as a series of comedies for US television channel HBO in the 1980s. His work is represented in renowned collections around the globe; solo exhibitions have been hosted by institutions such as MoMA New York, the Smithsonian, the Art Institute of Chicago, the Musée d’Art Moderne de la Ville de Paris and Kunsthaus Zurich.