On the street with Bill Cunningham 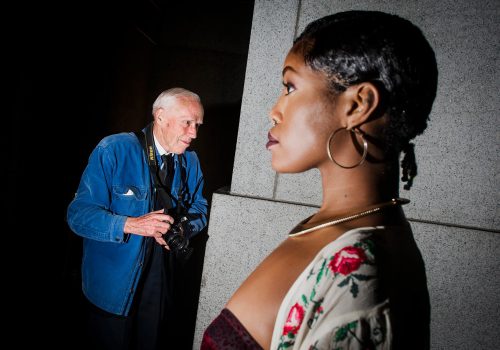 American fashion photographer Bill Cunningham, who died in June 2016 at age 87, was best known for his candid photographs of stylish people on the streets of New York. A Harvard University dropout, he was first a designer of women’s hats before moving on to writing about fashion for Women’s Wear Daily and the Chicago Tribune.

He began taking candid photographs on the streets of New York City, and his work drew the attention of the newspaper The New York Times with a 1978 picture of Greta Garbo in an unguarded moment. Cunningham cultivated his own fashion signature, dressing in a uniform of black sneakers and a blue work man’s jacket, his only accessory a camera. He travelled throughout Manhattan by bicycle and he worked for the New York Times until his death.

Many people learned about Cunningham from the award-winning 2010 documentary, Bill Cunningham New York (A Film by Richard Press). In it, many of Cunningham’s famous colleagues and friends are interviewed, including Vogue Editor Anna Wintour, Tom Wolfe, Brooke Astor, and David Rockefeller.

This month, the Colorado Photographic Arts Center (CPAC), a Denver-based nonprofit organization dedicated exclusively to the art of photography, presents On the Street with Bill Cunningham, an exhibition on loan from the New York Times celebrating his career. The exhibition includes audio clips of Cunningham speaking about his work in addition to many of his legendary photographs.

“When you see his images up close, you can really appreciate Cunningham’s eye for detail and uncanny ability to wait for the right moment,” said CPAC Executive Director Samantha Johnston. “Not only was he a talented photographer, writer, and tireless editor, but he brought incredible passion and joy to his work. He’s someone we can all learn from, and CPAC is thrilled to partner with the New York Times to share his work with the Denver community.”

Tiina Loite, a photo editor at The New York Times who worked closely with Cunningham, got to know him while she was working at the Style department. “He would say to me: ‘I’m not a photographer. I’m a columnist who writes with pictures,’” she said. “It’s easy to say ‘Bill Cunningham, photographer.’ But that’s not enough of a description of Bill. What he did was a complete different iteration of the job.”