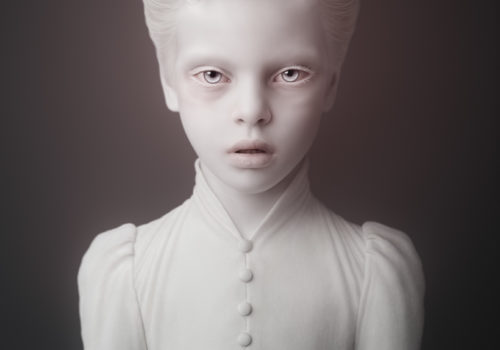 Born in 1983 in Moscow. As his mother was a painter and his father was a dress designer, in his childhood Oleg Dou used to gather with the artists and to spend a lot of time reading is father’s fashion magazines. At the age of 13, his parents offered him his first computer set up with an old version of Photoshop with which he already began to transform his schoolfriends or teachers faces. After studying design, he worked as a web designer. In 2005, he buys his first professional camera. Discovered in 2006 by Liza Fetissova (Galerie RTR, Paris).

Oleg Dou confides that he was inspired at first by a curious tradition practiced in XIX century : child funeral portrait. The shooting required a long and fine preparation. The costume in particular was very sophisticated and each detail was fancy, from the position of the hands to the slightest lock. The little fragile body, lifeless, prepared for the hereafter, was immortalized in a still life photograph.

In the other hand – this time from his true-life – the artist evokes an unhappy memory of his childhood, when, at the occasion of parties, he had to wear a costume. Dressed up as a white rabbit, a costume that his mother made herself with a lot of patience, the little Oleg felt terrible and bursted into tears when he had to smile at the camera. « I couldn’t pretend being happy in front of the camera, I hated being photographed. The image finally reflected my discomfort and my vexation. It’s still often the case today. I try to recreate the expression of this embarrassment in my portraits, but this time, I provoke it. For the « Cubs » series, all the costumes were tailored by my mother, based on my sketches. »