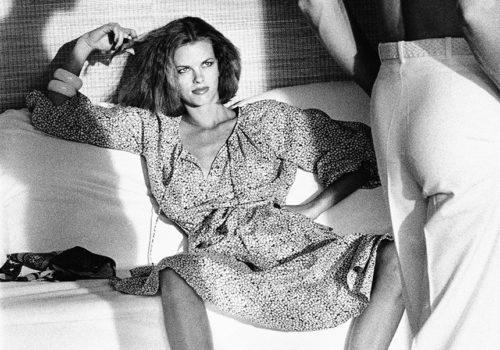 The title of the exhibition clearly circumscribes a geography, that of the Côte-d’Azur to Bordighera, in Italy, which Helmut Newton photographed from the 1960s until his death in the early 2000s. Newton, Riviera is thus a pretext to explore the work of a major 20th century photographer in a different way, through now famous images, and others rarely presented to the public.

“I like the sun ; it is no more in Paris,” Helmut Newton reportedly told the officer from Monaco  in charge of investigating his case. We are in 1981, Newton is sixty-one years old and he has established himself through daring series, constantly pushing the limits of what is acceptable, as one of the greatest fashion photographers of his generation.

His installation in Monaco is not retirement, quite the contrary. This period which runs from 1981 to 2004 (date of his death in a car accident) is one of the most prolific and, undoubtedly, the freest of his career. Monaco offered Newton an original setting for his fashion photographs. It is therefore not uncommon for one of the city’s construction sites to serve as the backdrop for a campaign he signs for a haute couture house.

It is also there that he produces many portraits of beautiful people, whether they have taken up residence in Monaco or are passing through. He also portrayed the stars of the Ballet de Monte-Carlo and the princely family.

In Monaco, Newton finally dabbled in landscape – a photographic genre that he had not approached until then – and developed one of his most personal series, “Yellow Press”, strange images, disturbingly glamour, inspired by crime scenes. While the Newton, Riviera exhibition is particularly interested in this period, it also a reminder of Newton’s old links with the Riviera. Thus, through 280 photographs, a solar Newton can be discovered with a look that is both ironic and fascinated by the elegant and easy way of life, a world of appearances and pretenses, of which he was both the actor and privileged witness.

The Newton, Riviera exhibition is designed in partnership with the Helmut Newton Foundation, Berlin.