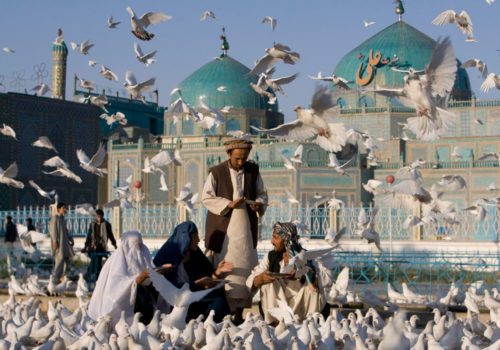 It is impossible not to be fascinated by Farzana Wahidy. If the fact that this is an Afghan war photographer is not enough to impress you, consider that we are also talking about a young woman. She is just 27 years of age and was the first female Afghan journalist to work for an international news agency in Afghanistan.

As a woman she has access to situations and places that no man can get close to. Her pictures therefore depict an Afghanistan we would never otherwise see. Clearly, growing up in a war-torn land has affected her. However, she is primarily interested in documenting the world of Afghan women, who she describes as”enormously exciting and fantastically colourful”.

Farzana considers photography to be an obligation, because she “knows how things really are”. All her childhood memories are connected with war, the fear of warfare and having to flee from war.
There are quite a few disadvantages to being a female photographer in Afghanistan. Farzana is often told by men, especially the conservative ones, that she should never have become a photographer. Despite this, she is encouraged by the great support she gets from her female subjects. Over 90% of the population in Afghanistan can neither read nor write. This makes it even more important that they are able to get information about their own country and, not least, the rest of the world, through pictures. As a female photographer, Farzana also has a clear advantage in the sense that Afghan women feel more able to tell her their stories. Previously, all the pictures depicting Afghanistan were either taken by men or foreign photojournalists. Moreover, their pictures focused on slaughter and warfare. Farzana, on the other hand, mostly takes photographs of women’s everyday lives; women shopping at the market, women caring for their children, women carrying out domestic chores. Implicitly, her pictures also describe women’s struggle against oppression. They show what a burden living in a patriarchal society can be and how difficult it can be to achieve equal rights.

Farzana was born in Kandahar and moved to Kabul when she was six years old. She went to school during the Afghan civil war. When the Taliban came to power and denied women the right to education, she secretly attended a school concealed in a flat along with 300 other girls. When the Taliban were defeated, she continued her education at the institute for photojournalism. In 2007 she gained a grant allowing her to study photojournalism for another two years at the Loyalist College in Belleville, Canada.

The Taliban regime controlled 90% of Afghanistan from 1996 to 2001. Farzana says photography gave her a sense of freedom, and her love of photography allowed her to escape the events around her. Her pictures have been shown around the world and published in the likes of The Sunday Times and Le Monde.

Farzana Wahidy is part of National Geographic’s All Roads Photography Program, which supports talented, self-taught photographers from around the world. She is the young photojournalist who portrays Afghan women’s lives to the outside world though a camera concealed in a burka.