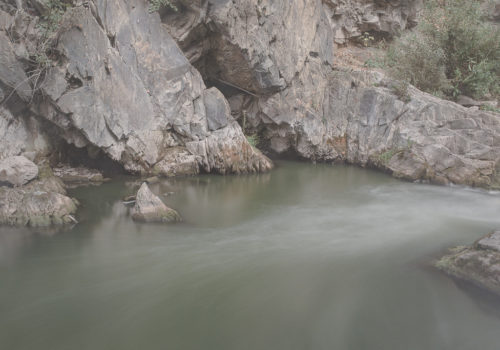 Lozhok is a place in the Siberian region, located 60km from Novosibirsk – the city where I was born.

From 1929 to 1956, there was the camp with particularly strict regime OLP-4 – one of the most terrible points of the Gulag system. Over 27 years of the camp’s working, more than 30 thousand people died in this place. Prisoners worked in two limestone quarries without protective equipment – limestone dust killed a man on average for six months. The bodies were burned in furnaces at nearby brick factory or buried in nearby forests and fields.

After the closure of the camp, the barracks in which the prisoners lived were destroyed. In their place in the 70s, the Palace of Culture, sports stadium, and a school were built. Underground sources filled one of the quarries, making it a lake. At its bottom there are still tractors and other equipment of that time. Another quarry is overgrown by vegetation.

When I came here for the first time, I immediately felt the strong energy of this place. It was as if I went inside Tarkovsky’s film “Stalker”, in the world after the catastrophe. I am interested in revealing the narratives contained within the local landscapes. Changes made by man and by the land itself overlap over time and transform the appearance of this space. The land here reveals itself as being both an agent of change and the field of human endeavour.

Despite the attempts of people, nature, and time to disguise the traces of those terrible events – this place definitely remembers everything.

Nick Tarasov (b. 1991) is a Russian-born painter, photographer and curator based in Shanghai, China.

He graduated from the Imperial Academy of Arts in St. Petersburg and Novosibirsk College of Arts. During studies Nick received the grant “Proud of Siberia” in nomination “Hope of Siberia”. In 2019, he became a finalist for the Prix HSBC pour la Photographie.

His photographs and paintings have been exhibited internationally in venues such as the Museum of the Academy of Arts, Blank Wall Gallery, First Watercolor Gallery, 5&J Gallery, Birmingham Museum and Art Gallery and at events such as Jakarta International Photo Festival, Reclaim Photography Festival, and Trieste Photo Days. He has been published in the books Immigration (RoHo Press, 2017) and Open Boundaries (LoosenArt), in magazines Ruum, Propeller, Shoot Film UK, Analog Forever, Lenscratch, Don’t Take Pictures, Prada Journal, among others. His works are in private collections in Russia, USA, Canada, UK, China, Serbia.