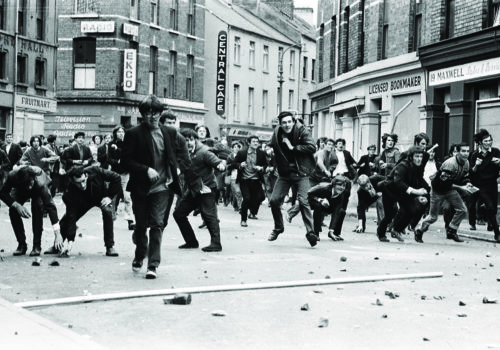 On August 12, 1969, the Apprentice Boys of Derry, Protestant Unionists of the Order of Orange, marched near the Catholic working-class neighborhood, defying the population. That was the start of The Battle of the Bogside, and the beginning of the “Troubles” in Northern Ireland. Nationalists retaliated with stone throwing and Molotov cocktails to tear gas and armored vehicles from British law enforcement.
Two days later, while other riots broke out in the country, the British army tried to intervene.
These events mark the beginning of a civil war that lasted nearly thirty years.

Gilles Caron [1939-1970] was in Londonderry on August 12, covering the Orange parade for the Gamma photo agency. He sensed the escalation of violence and once on site, and very quickly understood what was going to happen.

“It’s very simple. I was in Ireland before everyone else.

The day before the fights, I had gone there to photograph a parade which was to take place. Everything was calm and even picturesque. The demonstrators paraded quietly in soft hats with flowers in their buttonholes. At four o’clock in the afternoon, the fight started slowly, three, four, five stones  were thrown and suddenly it became important, they set fire to entire neighborhoods, and it lasted like that for three days.

We imagined that it was going to end as suddenly as it had started. In Paris they thought it was no longer worth sending someone. The demonstrators took the arrival of the English army as a victory for the Catholics. I thought it was over, I was going to go home when it started again in Belfast. From Londonderry I took a taxi to Belfast. I worked a day and a night,  flew to London and gave my photos to a passenger who was returning to Paris. That is to say that the next day at Gamma they had the originals pictures ready to be wired to the English newspapers. The guys from Paris Match arrived on Saturday when I was leaving.”

From the first shots of the procession parading to music, to the first throwing of stones, Gilles Caron recorded the rising tension. His photographs transcribe the triumphant posture of some and the gloominess of the others. The gestures of uprising that he immortalized in the first moments resonate with his photographs taken in Paris in May 68. But very quickly, the security forces facing the civilians seemed overwhelmed and the city was transformed into a battle field. Northern Ireland was at war.

Beyond the fact of being the “first” on the spot, the work of Gilles Caron is distinguished by the great modernity of his photographic approach. In four days, sixty-two black and white films and nearly three hundred color views, Gilles Caron developed a veritable narrative thread, alternating day shots with night shots, in black and white and in color. Very mobile, he constantly changed his point of view: shot, reverse shot, at the top of a building, at the corner of an alley; in one camp, then in the other.

The photographer approached the scene, he went, returned and stopped at the strategic places.

Sometimes he even seemed to precede the events. History was unfolding before our eyes.

In the midst of the chaos, the photographer focused his attention on individuals, important or anonymous characters.

His portraits of Bernadette Devlin, a figure in the civil rights movement in Derry, or the young boy in a gas mask who made the cover of Paris Match, became icons.

But other shots, on the sidelines of the reportage, do not seem directly intended for the press. Street scenes, portraits outside of hostilities, these glances and fleeting moments helped  build the story, express the tragedy.

Gilles Caron, thanks to these images, invited the viewers to question and opened the way to a new forms of photo-reportage.

Michel Poivert, in his book Gilles Caron, The Inner Conflict, writes: “Caron’s project was to tell the news differently, to integrate his own feelings about humanity into the visual shorthand of photojournalism. This attempt to find a new frequency between the exterior and interiority today resembles a forerunner of an author’s photograph that became the mark of the following decade. »

In four days in Northern Ireland, Gilles Caron produced one of his greatest reportages; a unique and important testimony to this turning point in history.

The exhibition invites visitors to discover this work, beyond the iconic images published at the time in the press.

It will present a set of seventy photographs, vintage and modern prints, as well as enlarged reproductions of contact sheets illuminating the work of the photographer.

Curator: Emmanuelle Vieillard, Nicéphore Niépce Museum
The museum would like to thank: The Gilles Caron Foundation, Marjolaine Caron, Louis Bachelot, Francisco Aynard, the Architecture and Heritage Media Library, Matthieu Rivallin, Emmanuel Marguet and Fannie Escoulen for their support for the realization of this exhibition.