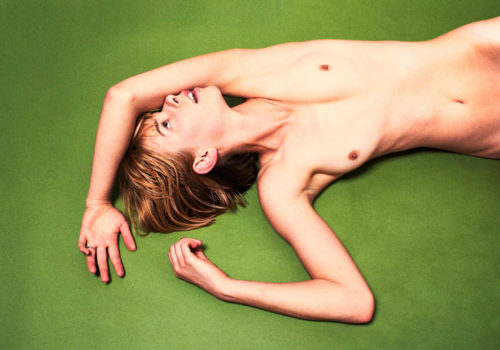 Here we are again with Ryan McGinley, now 36, as he continues his exploration of the boundary between public and private. Since his early portraits and photographs shot in nature and consumerism-free spaces, the artist has changed. The candid magic seems to have given way to a more commercial classicism. The mosaics on display at the Team Gallery in Soho are still highly appealing. Yearbook is a work of art in itself, composed of 753 studio portraits of nude models, printed on vinyl, covering the wall, ceiling and every inch of available space.

The project began in 2008 and is in keeping with the optimism and lightness of his recent work, like Animals (2012), which brought together human and animal subjects. With its countless colors, the jolly moods of his subjects and its prosaic representations of the body, this series is like modern Pop Art with unlimited means. The subjects are seated, standing or lying still, the wind in their hair, their faces cheerful, forgetting their nudity, with an insouciance that has characterized Ryan McGinley’s style from the beginning. The few black-and-white portraits are lost in the colorful, contemplative constellation.

As in Pop Art, the role of consumer society is essential. In Yearbook, McGinley has relied on the fruits of his appetite for the various aspects of visual culture, from the history of photography to old nude magazines and subway advertisements. Although the abundance of photographs makes a total reading of the series impossible, McGinley is also commenting on the images flooding the world through social networks. The feeling
is of being penetrated by each individual image but overwhelmed by all of them at once, like scrolling through an Instagram feed. A product of the artist’s sixth exhibition at the Team Gallery, Yearbook is a macrocosmic work made up of images that are aesthetically perfect and of undisputed emotional value, but which illustrate the tendency of tendency of certain major photographers to rely a little too much on the decorative function of their art.