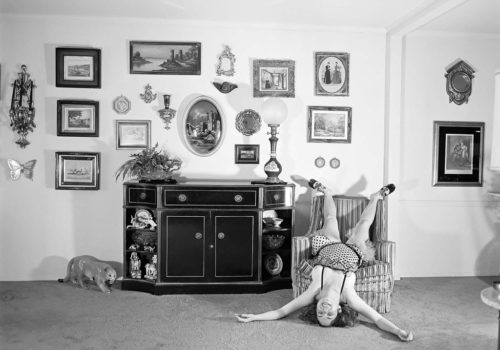 Preview
Steven Kasher Gallery has inaugurated last week its new solo exhibition devoted to Meryl Meisler’s earliest work. The exhibition includes over 35 black and white prints. The photographs capture the drama and exuberance of the 1970s, when pop-psychology encouraged everyone from suburban Long Island housewives to drag queens and disco queens to self-actualize and act out. The photographs drift between the kitsch-filled rooms of Meisler’s hometown in Long Island to the gritty clubs and streets of disco-era New York.
Meisler takes her stylistic cues from the snapshot aesthetic that was at the center of New York’s photo world debates since the New Documents show organized by John Szarkowski at MoMA in 1967. Meisler was inspired by Jacques Henri Lartique’s decades-long photo diary, Diane Arbus’ retrospective at MoMA in 1972 and Brassai’s effervescent Paris by Night photographs from the 1930s. These influences helped define her approach, which focused on personal diary, the snapshot aesthetic and night life. Her distinct, borough-spanning vision of New York in the 70s aligns her with the masters of Americana.
The earliest pictures in the exhibition, from 1973, are self-portraits, posed as a Girl Scout, a ballerina and other childhood identites. She then turned her lens on her friends, parents, relatives and neighbors, a quirky bunch. Meisler’s hometown of Massapequa was nicknamed “Matzoh Pizza” because of its many Jewish and Italian families. Outlandish décor ruled, inspired by everything from French Empire to Mid-Century Modern, and a cast of lively characters was ready to ham it up at the drop of a hat. “Homes are dramas”, Meisler says, and the people of “Matzoh Pizza” were in on the joke and eager for their moment in the spotlight.
Many of Meisler’s photos document members of the “The Mystery Club,” a group of eleven couples from nearby neighborhoods who would take turns planning “mystery” outings. These took them everywhere from haunted houses, recording studios and hypnotists to the Continental Baths in New York City and a nudist camp in South Jersey. Posing coyly in front of their matching wallpaper and  bedspreads and surrounded by ornately arranged tchotchkes, her subjects capture the pride and delight of people for whom the suburbs meant affordable homes and the chance to escape the urban streets that had become increasingly mean.
Moving back to the city from Wisconsin in 1975, Meisler worked as a freelance illustrator. She frequented the infamous New York clubs and discos, following a close-knit and diverse community of artists, feminists, drag queens, musicians and writers. She photographed the punks at CBGBs, the revelers at Studio 54 and the dancers at Playmates, Winks and The Magic Carpet where she worked as a hostess. Meisler’s night life photos put her and the viewer in the middle of the no-holds barred hedonism of clubs like Hurrah, Les Mouches, Xenon and other cathartic hot spots.
EXHIBITION
Meryl Meisler
Also to see : Brian Griffin, Capitalist Realism
From February 25th to April 9th, 2016
Steven Kasher Gallery
515 W. 26th St.
New York, NY 10001
United States
Tuesday through Saturday, 10 AM to 6 PM
http://www.stevenkasher.com
http://www.merylmeisler.com