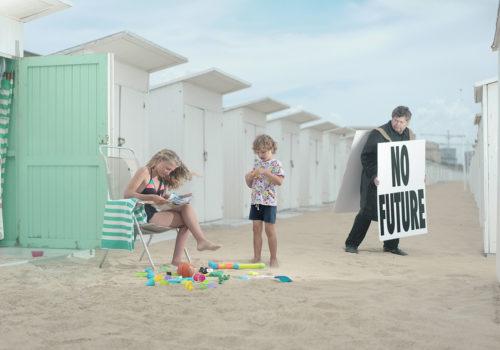 The feeling of not being understood, no one escapes it. In the eighteenth century, Immanuel Kant chose the term Ungesellige Geselligkeit  (unsocial sociability) to describe the tension between the individual and society. The fact that this tension has not eased since became painfully clear during the pandemic crisis, when we were all forced to give up many individual freedoms for the sake of society.

For artist Bart Ramakers, this evoked the image of the sandwich man, who expresses his message in hard letters on a panel. This time, no baroque staging, scantily clad ladies and gentlemen, references to mythology or art history that we are used to seeing from this Belgian photographer, no chiaroscuro effects – no, in this project he was forced to lay aside all the frills in order to concentrate on the essence. Sometimes against the wind, because he chose Ostend as the setting. In a world where only the loudest voices are heard, the unstoppable wind that drives the sea across the land silences everyone, just as the covid measures silenced us all for a while.

In the first part, we follow sandwich man Geert Stadeus (editor in chief of Snoecks) on his highly individual quest for an audience through Ostend. “Sandwiched between nature and society, sandwiched between contradictory feelings, sandwiched between expectations and own wishes, sandwiched between the words on your back and your stomach. Does it help to shout and rant?” is how he described the experience. The slogans often bear witness to his subtle humour, but they take on a whole new dimension with Geert’s death. Even before the project was completed, he died in a cycling accident. Bart Ramakers allowed him to continue his journey in a posthumous sequel, in which he presents his messages in historical photographs of pre-war Ostend. This entire personal photo story can be viewed at CAS Ostend.

Ostend is not just the sea and the dike and the wind, it also has more than 70,000 inhabitants of more than 130 nationalities. As a logical sequel to the project with Geert Stadeus, Bart Ramakers and the Department of Leisure of the City of Ostend developed a second part, in which dozens of inhabitants of Ostend were portrayed at their favourite location in the city. They are each sandwiched between two panels, provided with a slogan of their own choice. The result is a fascinating mosaic of Ostend citizens from all horizons, with very diverse messages for mankind, which can be seen at the Nieuwe Gaanderijen (New Galleries) in Ostend.

– Nieuwe Gaanderijen (New Galleries) in Ostend from 10 August to 26 September (continuously on display).

OPENING EVENT Wednesday 10 August 17h at the Nieuwe Gaanderijen, with speech by Alderman of Culture Bart Plasschaert, followed by a drink in CAS, Musinstraat 19 Ostend.