Namsa Leuba, Ya Kala Ben and The Kingdom of Mountains 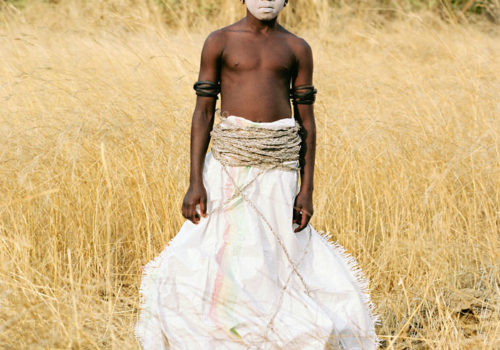 In Camera Gallery features two series by Namsa Leuba, Ya Kala Ben (2011) and The Kingdom of Mountains (2014), both outdoor mises-en-scène that explore the representation of African identity.

Namsa Leuba has taken Africa to heart, a continent that is as much her home as Switzerland where she was born, in Neuchâtel, in 1982. Her father is Swiss, her mother Guinean: dual culture, dual exhibition, and no lack of courage. This African-European, as she likes to call herself, travels up and down the African continent, unabashedly recreating her own context, as in Ya Kala Ben, meaning “shared perspectives” in the Malinke dialect, her first series created in her ancestral village in Upper Guinea in 2011. Her objective: “To represent the invisible.” As she puts it, the idea was to “touch the intangible,” that is to say, to interpret rituals tied to Guinean cosmology, along with those “statuettes that are instrumental in the ceremonies.” Hers is a deeply artistic gesture. Hence the characters that become symbolic on paper, and vice versa, posing in custom-made costumes, turn into ritual figurines fashioned between earth and sky, like reflections in a desacralized mirror.

Three years later, in Lesotho, not far from the Katse Dam, Namsa Leuba conjures up The Kingdom of Mountains, constructing a whole new story, as uncanny as it is real. Framed in a naturally mountainous setting, these majestic portraits translate a certain form of “cultural hybridity,” reflecting “the duality of my personal heritage.” These aren’t documentary portraits, she clarifies, but rather imaginary propositions since each image is stylized by the artist. Namsa Leuba thus intends to explore African identity, to study ethnocentrism, dismantle stereotypes. She belongs to a generation freed from the shackles of the analog and from the confines of time zones. Just a while ago she was in South Africa among Zulu kids; and last autumn, in Lagos, Nigeria. She never tires of blending her taste for city life and fashion, stage sets and accessories, and her desire for movement is the mark of a woman in love with her independence. And now here she is in Paris, at last!

Brigitte Ollier worked for 30 years as a photography critic for Libération and is now an independent writer.