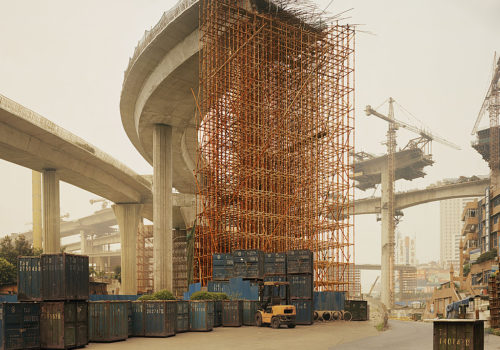 m97 Gallery is pleased to present “YANGTZE, THE LONG RIVER”, the latest project by world-renowned photographer Nadav Kander. In 2006, drawn to the immense scale of China and its development, Nadav Kander embarked on the project of photographing the Yangtze River, whose banks and waterways provide home and livelihood for hundreds of millions of Chinese. Taken along the river from its source in remote western China to its mouth just off the shores of Shanghai, these photographs depict the human footprint of habitat and industry that can be seen along the shores of China’s longest river.

Taken over a three-year period, Kander’s Yangtze River photographs speak of a China in the process of radical change, and of man’s futility and subjugation of the natural world in the pursuit of development. Following the course of China’s longest river upstream, Kander created a profound and contemplative body of pictures. Much like the Buddhist metaphor of a river itself, the photographs evoke a certain sense of the eternal and ephemeral, of man’s footprints amidst constant change and the flow of time. Documenting the effects of this change on the lives and traditions of the people who live in the river banks – in all, a population greater than that of the United States – resulted in this body of stunning photographic works which capture the timeless toil of man against nature, yet in an incredibly timely manner during a period of major upheaval along the Yangtze River. These photographs, however, go beyond documenting China’s relentless development, as they poetically allude to the fragility of our world and the damage humans may tend to inflict – damage that is not constrained by national boundaries. Kander is well aware that “this project was about us all, about our interrelatedness, and not just about China.”

In 2009, Kander’s “Yangtze, The Long River” series was awarded one of photography’s most respected international prizes, the Prix Pictet Photography Award. m97 Gallery exhibited a preview of the work in progress in 2007 and now presents the completed work for the first time in China. A clothbound 188-page monograph of the series has just been published by German publisher Hatje Cantz and will be available in the gallery.

Nadav Kander is recognized as one of the most original and highly regarded photographers of our time. His work forms part of the public collection at the National Portrait Gallery and the Victoria and Albert Museum in London.

Kander’s most recent and highly acclaimed fine art photography project titled “Yangtze, The Long River” won the 2009 Prix Pictet. A monograph of the works in this series has just been released by Hatje Cantz (September 2010).

Other awards include the D&AD and the John Kobal Foundation in the UK; Epica in Europe; the Art Director’s Club and IPA in the USA and the Silver Photographer of the Year Award at Lianzhou International Photo Festival 2008 in China. He was also awarded the prestigious Royal Photographic Society’s ‘Terence Donovan’ Award in 2002 and was nominated for the Schweppes Photographic Portrait Prize in 2003.