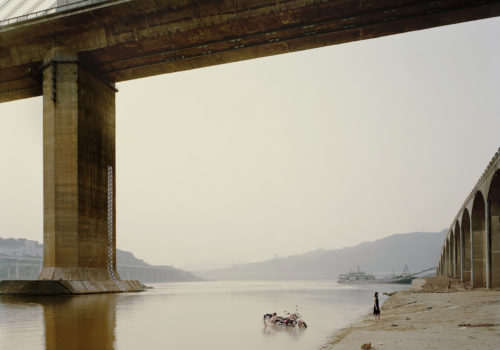 Nadav Kander is exhibiting together with Robert Polidori at Camera Work in Berlin. For La Lettre, Thomas Erber talked to him about his award winning series Yangtze – The Long River and the importance of exhibiting.

First, how did you start photography and how has it evolved since?
Right from the start my photography had a sense of unease but also simplicity. Even my first pictures, which I made at 13, had the 48 year old in them.

Your photography doesn´t fit the usual classifications like ”fashion”, ”portrait”, ”advertising” etc. It feels more like you’re going where your desire is leading you. How do you manage keep such an approach?
Early on I used to look at the work of Edward Weston, and he used to photograph across many genres. A cloud felt like his nudes and a contorted pepper felt the same as his portraits or nudes. I subconsciously realised that his images were all held together effortlessly by the fact that the same artist was attempting to express himself with whatever interested him and not compartmentalising these genres. This affected me and is my truth today. I am not sure if anyone else sees it, but to me my nudes feel like my portraits, which feel like my landscapes etc. They all have the same atmosphere.

Your last work in China obviously but indirectly put the environment in perspective. And the fact that we are both responsible for, and slaves of, the deterioration of the environment…
In China I found it poignantly beautiful and showed this feeling by depicting man as small against the bigness of our ideas. In the past in times of great change painters like John Martins or Caspar David Friedrich showed man as small pitted against religion or the feeling of expanding one’s horizons against the suppression of the Church. Without realizing this I found myself photographing people as small for I was “stepping back” feeling like such an outsider in China. I took advantage of this to show a nation severing its roots by destroying its past. I was responding to a country that feels both at the beginning of a new era and at odds with itself.

You have just opened a new exhibition in Berlin togehter with Robert Polidori. What is the power of an exhibition and why exhibit?
Exhibitions and books are a pleasure and a necessary part of the evolution of an artist´s project. They are a way of closing a chapter in your life. They are also necessary for viewers to react and respond to the work. What is art if there are no viewers to view?

After China, what’s your plan?
I am now thinking what is next? I have been working on Nudes for a while now and some will be exhibited at CAF in Spain in a month. Other than that for now I am thinking what’s next and continuing my very rewarding and enjoyable commercial work, which is all about collaboration and communication.
Thomas Erber

Nadav Kander won the highly distinguished Pictet Prix with his series Yangtze – The Long River in 2009. In the same year he attracted great attention with the series Obama’s People . The New York Time Magazine printed the complete and repeatedly award-winning 52-page series in the course of a special edition for the swearing-in of the American president. The series is on view until spring 2011 in the museum THE KENNEDYS, located near the Brandenburg Gate. Nadav Kander works for various magazines, such as Another Man, Dazed & Confused, The Rolling Stone, The Sunday Times Magazine, The New York Times. Nadav Kander was born in Israel, raised in South Africa and now lives in London.

Thomas Erber is journalist and curator. He´s specialized in music, journeys and fashion. Thomas has worked with many prestigious photographers for publications such as Le Monde, Vogue Hommes International, Jalouse etc. His next Cabinet of Curiosities will open at Browns in London in December.