Musée d’Orsay : Sophie Calle and her guest Jean-Paul Demoule : The Ghosts of Orsay 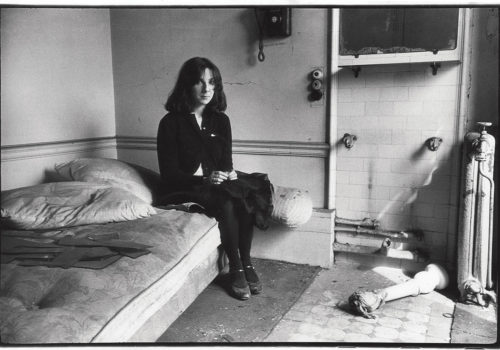 In 1978, the Orsay train station and its hotel had been deserted. Construction work on the future museum hadn’t yet begun. It was at that moment that Sophie Calle pushed a door that gave way and chose an abandoned room to take shelter in: Room 501. She spent entire days there, for several months, before her departure for Venice which was to mark the beginning of her future work. During this stay, she felt the desolation of a place, like an archaeological space where everything had been abandoned. She took pictures, invited her friends, collected documents, objects, the records of the people who had stayed in the hotel like so many open lives, the notes addressed to a hotel employee named Oddo, whose identity she imagined. In some respects, Calle developed her method in the Hôtel d’Orsay.

To this date, she has kept the items captured during her exploration, from a place in the process of disappearing. All these “trophies” – as she calls them – have accompanied her for more than forty years, like so many ghosts from a world that no longer exists.

During the lockdown, the idea was born for an evocation of the hotel and the museum that had succeeded it. This is how the project The Ghosts of Orsay was born, like a return of the artist to her tracks, a quest into the past to find the key to an unsolved enigma, which found its symbol in the figure of Oddo.

Sophie Calle thus resumed her journey by returning to confront the hotel and the museum, both brought together in this “return” exhibition. In the hotel, you will discover the personal traces of the experience lived by Calle and by all those who stayed there, worked there, and whose minute and moving signs she collected; you will see, assembled like conceptual pieces, the hotel patron files of which she was the holder. The objects, with commentary by the great anthropologist Jean-Paul Demoule, become excavation objects and ready-mades, traces of a past so close in time and yet so far away.

Calle returned to Orsay in the midst of a lockdown while the artworks were dozing, finding herself once again alone in the space she had inhabited. She sought to highlight the paintings in the dark. In her photos, you will experience them as never before.

The Ghosts of Orsay is a total work by Sophie Calle, weaving a permanent back and forth between her beginnings and the whole of her creation. In it, we find the multiplicity of forms she adopts, from photography to poetry, from the ready-made to composition and to collaboration. It reveals Calle’s unique ability to weave narratives, to permanently hold together the personal path and the multiplicity of a place, of a history, and of each and every one among us. Visitors to the museum will return to the now-defunct hotel, just as Calle immersed herself in the museum after having experienced the hotel. The exhibition will reveal the ghostly ensemble of the Musée d’Orsay, where the ghosts are those of all the people and works that have passed through it. It will allow you to feel the depth of a place, and the very texture of the museum, at once immediately present, seemingly temporal, and yet changing so much through Calle’s life – through forty years of collective life.

The Ghosts of Orsay is an exhibition conceived by the artist, in collaboration with Jean-Paul Demoule, archaeologist, on a proposal from Donatien Grau, advisor for contemporary programs at the Musée d’Orsay.