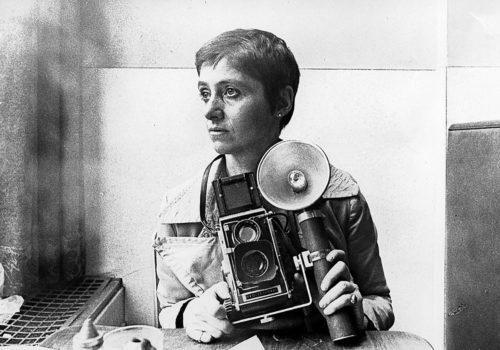 The striking black and white photographs of American photographer Diane Arbus (1923–1971) revolutionized portraiture because of their style and variety of subjects. Arbus, whose shots were taken, for the most part, in New York and its surroundings, selected her subjects couples, children, nudists, suburban families and circus artists, among others – for their singularity.

Diane Arbus: Photographs, 1956-1971 brings together some 90 photographs by the artist carefully selected from 522 gelatin silver prints acquired in 2017 by the Art Gallery of Ontario, as well as a print from the permanent collection of the MBAM. Whether intimate explorations in the streets of New York or large-format portraits, these shots testify to the singular and revolutionary vision of the illustrious photographer.

Highlighting the evolution of the artist over 15 years, this exhibition gives a chronological view of the extent of Arbus’ career. It opens with a remarkable self-portrait made in 1945, then takes the public to 1956 – the year Arbus decided to devote herself to photography. These early 35mm images reveal an artist fascinated by the diversity of humanity and life as it unfolds on the streets, while later works, created in larger format, mark her emergence as a mature artist of great talent. Her style, direct and ardently centered on the subject, marks many of her emblematic works. Accompanying the photographs, quotes from the artist offer themselves as so many observations on her choices, her intentions and her technical difficulties, as well as the happy chance encounters and discoveries.

“ The exhibition allows the public to discover the bold gaze of the American artist, or, for those who are already familiar with her work, to appreciate its astonishing diversity by discovering some of her first photographs, rarely shown. It shows the moving nature of the artist’s quest, which sought to probe the human condition to reveal what unites us and what divides us”, explains Anne Grace, curator of modern art, MMFA, and curator of the Montreal presentation of the exhibition.

“We are delighted to introduce Diane Arbus to a new generation of visitors. In just fifteen years, she has produced a body of portraits considered the most impressive of her time, adds Sophie Hackett, curator of photography at the Art Gallery of Ontario and curator of the exhibition. The acquisition of our collection of photographs by the artist in 2017 marked an important turning point for our museum and for Canada. Today we have the honor of presenting these prints to the public of the MMFA. »

Born in 1923, Diane Arbus grew up in a wealthy New York family that owned a department store on Fifth Avenue. In 1941, at the age of 18, she married Allan Arbus; for the next 10 years, they worked together for fashion magazines, he as a photographer, she as a stylist. Although she began taking pictures herself in the early 1940s, it wasn’t until 1956, when she numbered her first roll of film, that Arbus got serious about the work for which she is well known today. During the 1960s, she published over 100 photographs in reputable magazines such as Esquire and Harper’s Bazaar. In 1963 and 1966, she received a Guggenheim Fellowship for the American Rites, Manners and Customs project. The photographs she produced during those years attracted the attention of critics and the public when some of them were selected for the famous exhibition New Documents, presented at the Museum of Modern Art in New York in 1967. By the time of her suicide in 1971, Arbus was already a legend among professional photographers, although only a relatively small number of her most important works were widely known. In just over 15 years of career, Arbus has produced a body of work whose style and substance have earned her a place among the most influential artists of the 20th century.