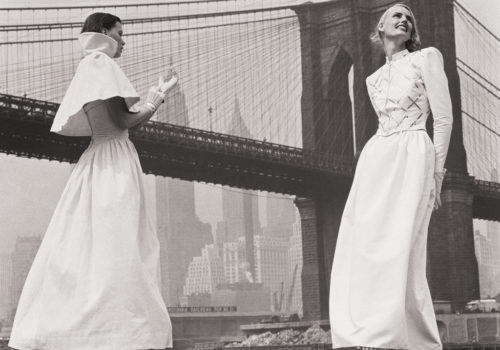 Hermann Landshoff was born in 1905 in Munich, where he grew up in a family of Jewish artists before fleeing his homeland to Paris and, eventually, New York. Like other great artists of the 20th century, his vast body of work has received little attention since his death because of his status as an exile , a protracted transfer and the processing of his archives.

For the past two years, things have clearly accelerated. In 2012, the publisher Andreas Lanshoff donated the complete archives of his photographer cousin to the Müncher Stadtmuseum in Germany. Now the museum is holding a large retrospective through April 21st, 2014, and a monograph featuring 300 photographs has been published by Schirmer/Mosel. The exhibition and the book examine the three main aspects of Hermann Landshoff’s work: fashion photography, architectural photography and portraits.

Landshoff’s fashion photographs are a real delight. The models pose on the roofs of Paris, the bridges of New York, the beach, the zoo and on bicycles. He liked to stage scenes from everyday life and fill them with humor, creating a series of very enticing images.

Starting in 1936 he worked for Vogue in Paris then Femina in 1938. He spent the rest of his career in New York, where he collaborated with art directors Alexey Brodovitch at Harper’s Bazaar and Junior Bazaar, and Bradbury Thompson at Mademoiselle, for which he shot creative, colorful covers from the 1940s to the late 1950s.

Another important aspect of Landshoff’s work is the gallery of artists and scientists he photographed over forty years. In New York, he was part of a circle of artists who had fled their countries for political reasons and who had gathered under the auspices of Peggy Guggenheim. He photographed his Surrealist friends Marcel Duchamp, Piet Mondrian, André Breton, Fernand Léger, Max Ernst and Leonora Carrington in Guggenheim’s house with her artwork collection as a background. He also photographed artists like Alexander Calder and Eva Hesse in their studios as they interacted with their own work.

Over the years he took some 70 portraits of his fellow photographers, including Arnold Newman, Robert Frank, Berenice Abbott, Edward Steichen, Erwin Blumenfeld, Cecil Beaton, Irving Penn, Weegee, André Kertész and Walker Evans. It’s a true gift for the history of photography. One of Landhoff’s subjects, a young man named Richard Avedon, whom he photographed in 1948, would later say: “I owe everything to Landshoff.”