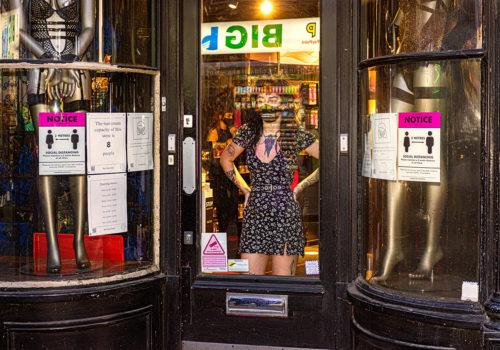 On show for the first time at the Motel Collection Gallery, London since August 2022, Wallace’s latest and on-going project, ‘Soho Unlocked’, which charts the re-emergence of life in the pubs, clubs, theatres and streets of one of London’s most diverse and culturally rich areas. A selection of works from the series will be going on display.

Soho has always been at the epicentre of the global zeitgeist. Its mix of edginess, sleaze and high class combined with its ability to constantly change creates a fascinating and fertile ground for social documentary. ‘Soho Unlocked’ captures a distinct new chapter in the history of London’s popular destination. It starts to unravel in July 2021, following the lifting of COVID-19 restrictions on the entertainment and hospitality industries, Soho’s bread and butter. After receding from public spaces during lockdown, Londoners (with a notable lack of foreign tourists and weekend trippers) started to descend on Soho once again for events (delayed EURO 2020; festive holidays), mixing with Soho’s regulars.

To accommodate socialising under new conditions, several streets were closed off to traffic. This activated the area like never before. Against the backdrop of social distancing rules in venues and streets patrolled by ‘covid marshals’, a new defiant spirit emerged. Raucous hysteria and freedom from constraints are on the menu. The atmosphere became reminiscent of Soho from the 1990s, which was conducive to the flourishing of underground subcultures and causes that would go on to have a huge mainstream influence.

Featured are theatre and bar staff; trendy media folk from post-production studios and private member’s clubs, which have replaced the many sex shops, hostess bars and adult cinemas. Girls in their designer heels and totes are rubbing shoulders with boys on their daredevil bikes or scooters. Small-time dealers are never far away, ready to oblige with colourful nitrous oxide balloons and refill canisters to fuel the desire for instant thrills. A vibrant LGBT+ community has thrived since the beginning of the 21st century. Although cross-generational, there is nevertheless a dominant feel that a new generation has arrived, challenging old hegemonies. If Soho is a precursor sign of our times, the future is rainbow: open-minded and inclusive.

Dougie Wallace is recognised internationally as one of the leading social documentary photographers. He has spent the last 10 years working on subjects as diverse as Premier Padmini taxi drivers of Mumbai to the hen dos of Blackpool, and the gentrification of London’s East End. He has won numerous prestigious awards, and exhibited as a solo artist and in group shows worldwide. Wallace has also been featured in a wide range of professional and consumer media. This includes being the subject of the coveted BBC TV Documentary series, What Do Artists Do All Day. He has also published seven critically acclaimed books.

The Motel Collection Gallery is a new dedicated photography gallery in the heart of London’s East End. The new gallery will be the first fully-focused space dedicated to exhibiting the best in contemporary and modern photography. Alongside the exhibition programme, the gallery will host events, talks, seminars, book launches, and photography workshops. The gallery will be open on weekends, First Thursdays evening events, and by appointment.