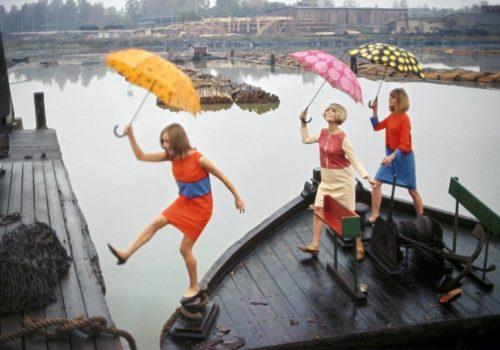 Today December 20th is Tony Vaccaro’s birthday. 100! The Monroe Gallery of Photography celebrates this milestone with two exhibitions, a pop up in New York which closed this weekend and a second show at their gallery in Santa Fe which is on view through January 15, 2023.

Vaccaro is known for his photographs of WWII, which were the subject of a 2016 HBO documentary, and his editorial work for Life, Look, Newsweek, Vanity Fair and countless other publications. The exhibitions coincide with Tony Vaccaro 100!  on view at the Museum für Photographie in Braunschweig, Germany. In both locations, Tony Vaccaro: The Centennial Exhibition, juxtaposes the living legend’s powerful war images with the lyrical mid-century fashion, film, and pop culture photographs that came later.

On view are more than two dozen photographs dating from 1944-1979. From the battlefields of Europe to the rooftops of Manhattan, Vaccaro trained his inimitable lens with a sensitivity derived from early hardship as an orphan in Italy. After the war, he replaced the searing images of horror embedded in his memory, by focusing on the splendor of life and capturing the beauty of fashion and those who gave of themselves: artists, writers, movie stars, and cultural figures. From a photograph of a running soldier in 1944’s Battle of the Bulge to a shot of the actress Gwen Verdon swinging in a hammock against a New York skyline, the exhibition illustrates Vaccaro’s will to live against all odds and to advance the power of beauty. Several never-before-exhibited photographs will be on view: a 1951 image of a bevy of beautiful women surrounding one in a pink dress on a balcony, a 1968 shot of Vaccaro holding up a test strip during a photo shoot, and a glowing sunset portrait of the twin towers of the World Trade Center from 1979.
As Vaccaro nears his 100th birthday on December 20, 2022, he has survived two bouts of Covid, and is one of the few people alive who can claim to have survived the Battle of Normandy and Covid. He attributes his longevity to “blind luck, red wine and determination.”

“To me, the greatest thing that you can do is challenge the world,” said Vaccaro. “And most of these challenges I win. That’s what keeps me going.”

About Tony Vaccaro
Born in Greensburg, Pennsylvania, on December 20, 1922, Michelantonio Celestino Onofrio Vaccaro spent the first years of his life in the village of Bonefro, Italy, after his family left America under threat from the Mafia. Both of his parents had died by the time he was eight years old, and he was raised by an uncaring aunt and a brutal uncle. His love of photography began in Bonefro where at age ten, he began taking pictures with a box camera. When World War II broke out, the American ambassador in Rome ordered Vaccaro to return to the States. He settled in with his sisters in New Rochelle, N.Y., where he joined his high school camera club. His teacher and mentor Bertram Lewis guided him through a year of concentrated apprenticeship.

A year later, at the age of 21, Vaccaro was drafted into the war. He was determined to photograph the war, and had his portable 35mm Argus C-3 with him from the start. By the spring of 1944 he was photographing war games in Wales. By June, now a combat infantryman in the 83rd Infantry Division, he was on a boat heading toward Omaha Beach, six days after the first landings at Normandy. For the next 272 days, Vaccaro fought and photographed on the front lines of the war. He entered Germany in December 1944, as a private in the Intelligence Platoon, and was tasked with going behind enemy lines at night. In the years after the war, he remained in Germany to photograph the rebuilding of the country for Stars and Stripes magazine.

Returning to the States in 1950, Vacarro started his career as a commercial photographer, eventually working for virtually every major publication: Flair, Life, Look, Harper’s Bazaar, Quick, Newsweek, Town and Country, Venture, and many more. Tony went on to become one the most sought after photographers of his day, photographing everyone from Enzo Ferrari and Sophia Loren to Pablo Picasso, Peggy Guggenheim and Frank Lloyd Wright. From 1970 to 1980 he taught photography at Cooper Union.

Since retiring in 1982, Vaccaro’s work has been exhibited world-wide over 250 times and has been published or been the subject of ten books and two major films. In 2014, the Museo Foto Tony Vaccaro was inaugurated in Bonefro, Italy.

Vaccaro’s works are in numerous private and public collections including The Metropolitan Museum of Art in New York, the Georgia O’Keeffe Museum in Santa Fe, the Centre Pompidou in Paris, and the Library of Congress in Washington, DC.

In 2016, HBO Films premiered Under Fire: The Untold Story of Private First Class Tony Vaccaro. The film tells the story of how he survived the war, fighting the enemy while also documenting his experience at great risk, developing his photos in combat helmets at night and hanging the negatives from tree branches. The film also encompasses a wide range of contemporary issues regarding combat photography such as the ethical challenges of witnessing and recording conflict, the ways in which combat photography helps to define how wars are perceived by the public, and the sheer difficulty of staying alive while taking photos in a war zone. The film has led to a career renaissance for Vaccaro.

In 2018, Vaccaro’s photographs were featured in major one-person exhibitions in Venezia, Italy; Potsdam, Germany; London, England; and Santa Fe, New Mexico. In 2019, he was inducted into the International Photography Hall of Fame in St. Louis, Mo. In 2021 the Kunsthalle Helsinki presented the exhibition Tony Vaccaro: Life Is Wonderful, a selection of 130 images from his career of nearly 80 years.